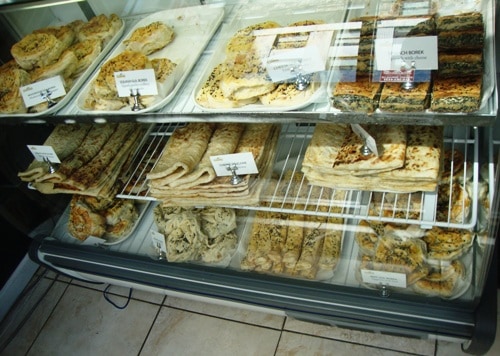 Do we have Turkish Food in New York? If you’ve ever been to some of the holiday markets around town (or read our reviews of them), you may remember Mmm…Enfes. They serve Turkish food including boreks, golzeme and desserts like baklava.

Until we walked past it yesterday, we did not realize they opened a small storefront on 39th St just east of 6th Ave.  There were only about 4 stools and a small counter to eat at, which qualifies them for Honorary Street Food status.

We got a sigara for $2 and a gul (beef) borek for $5.50. While we were waiting for the food to get warmed up, they handed us (and several other people waiting) a sweet called Turkish Delight on the house. It’s always fun to eat dessert first! 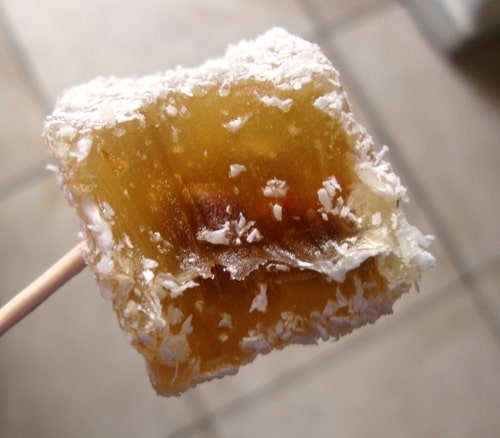 The Turkish Delight was a jellied candy with pieces of pistachio nuts that was dusted with powdered sugar. It was sweet and tasty. Just make sure you don’t have any loose fillings.

Walking over to Bryant Park on this beautiful day, we found a little spot and broke out lunch.

The sigara was long and thin and made with phyllo dough. Inside the dough was cheese and a little parsley, and there were black sesame seeds on top.

The cheese was in the feta cheese family, which isn’t much of a surprise coming from that part of the world. The cheese had a little bit of tartness, and somewhere in there was a spiciness that lingered after we finished the sigara. This was a warm and inviting way to start the meal.

Once we finished the sigara and picked up the beef borek, it was apparent this part of the meal would be quite different. The beef borek was much heavier in weight, as well as taste.

A borek is made with tubes of phyllo dough stuffed with various fillings such as cheese, potato, chicken or beef. The tubes are rolled into a spiral and baked.

The filling was mostly ground beef in a little bit of gravy that ended up being like beef mush. It was on the bland side, and not too appetizing. As we said, it was also very heavy, and halfway through, we had enough. 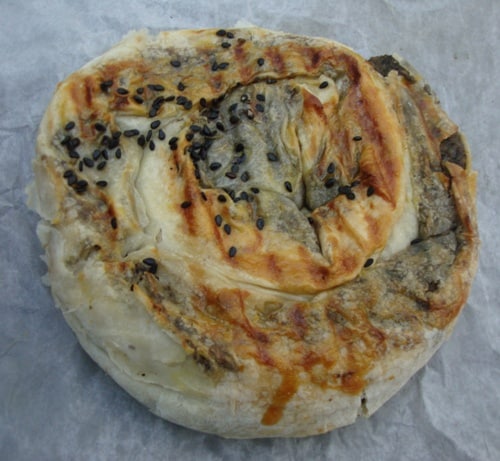 We won’t say you should stay away from Mmm.Enfes, but certainly recommend the cheese filling over the beef. Now we’re curious about the chicken.

The Turkish Delight was a nice couple of bites for dessert, and we remember enjoying their baklava too. And well, I guess we do have Turkish Food in New York.

Mmm…Enfes is at 70 West 39th St, a few doors east of 6th Ave. They don’t have a website, but facebook is here and twitter is here.

Let us know what you think of their various offerings.

How Was The Salmon with Leeks at Num Pang?