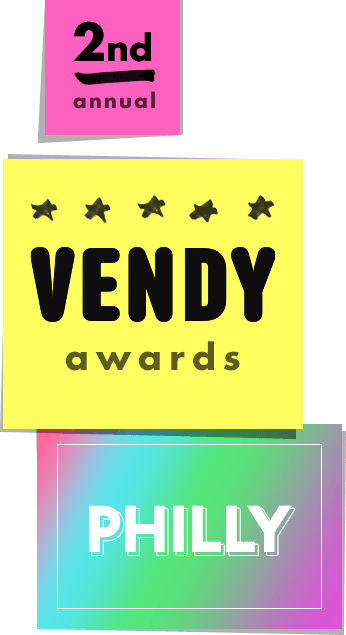 The weather was perfect day to get the The Vendy Cup at the 8th Annual Vendy Awards, held on Saturday, Sept 15th. The event was held for the 3rd straight year on Governors Island, an awesome setting on a beautiful day.

Eleazar Perez and her children took home the Vendy Cup with a sampler plate of 3 tacos: carne asada (beef), al pastor (pork) and goat tacos. These were clean, simple tacos, with just onion and fresh cilantro on two and pico de gallo on the other.

James Cunningham, host of Eat St on the Cooking Channel, was the host and one of the judges. He said what put Piaztlan over the top was their salsas, of which there were four different one to choose from.

Adam Sobel and his crew at the Cinnamon Snail won the People’s Choice Award. That means people attending the event voted Cinnamon Snail’s offerings as the best in the main category.

Adam came with two sampler plates, one savory and one sweet. The savory plate had thinly-sliced portobello mushroom carpaccio that had been roasted in tea, and was served over horseradish mashed potatoes. On the right was a guchujang slider, basically an ancho-chili seitan slider with sriracha mayo.

During the day, we had a chance to speak with James Cunningham, and asked him which dishes he thought were the best. James told us the portobello carpaccio was his choice as the standout dish of the day. We would be hard pressed to disagree.

The Cinnamon Snail’s desserts were just as good. The chamomile donut with lemon lavender glaze was delicately flavored and sublime. The white chocolate macadamia twinkies were also very good, as was the fig pancake with blood orange syrup and pine nut butter.

Adam and his crew really kicked ass, and winning the People’s Choice Award was well deserved in their 3rd Vendy Awards appearance.

Uncle Gussy’s came out strong, putting together a sampler plate with everything they do well – bbq chicken, pork souvlaki,  lamb gyro, rice, a Greek salad, and their Mom’s famous tzaziki sauce. Uncle Gussy’s even served a zucchini fritter for vegetarians, which was very good.

Galdino Molinero of Tortas Neza dyed his hair green for the occasion, and also brought along 3 great sandwiches. Our first taste was a torta of pork carnitas and quesillo cheese that was delicious. The pork was nice and crispy. Yum!

We went back for another taste later in the day and got a chicken Milanese torta. Their white meat chicken breast in a golden fried breading was really good too.

Xin Jiang Prosperity Kebabs came in from Chinatown with three well-spiced kebabs of lamb, beef and chicken. They kept their spice blends a secret, although the lamb obviously had cumin in the rub.

Hamza & Madina Halal from Queens had chicken and lamb gyros, falafel and kofta kebabs. Their specialty is white sauce, with the crew wearing green t-shirts that said “Got White Sauce?” on the back.

Their menu was very meat-centric and delicious, with the hot sauce being one of the hottest we tasted at the Vendys this year.

Congratulations to all the Finalists and Winners. As James Cunningham said, with thousands of street vendors in New York, just being nominated is a huge achievement.

Check back later for our reviews of the Best Dessert, Rookie of the Year and Best Market Vendor categories.