Home Promotions YOU CAN HELP MAKE (AND WIN) “THE MOST INTERESTING JAM IN THE... 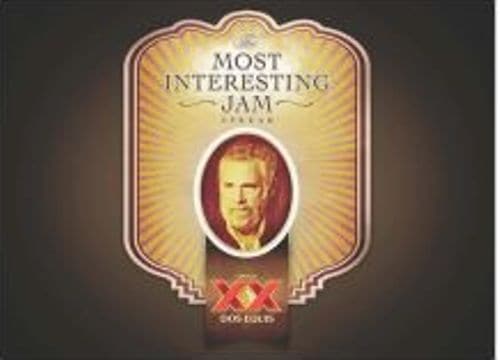 It’s time for a new contest on New York Street Food, and Dos Equis’ The Most Interesting Man In The World has given us a great opportunity.

After writing about the Dos Equis Feast of the Brave truck in the spring, they contacted us about a new online fan challenge they have to help make the  The Most Interesting Jam In The World.  While this has nothing to do with street food, it’s too much fun to pass up.

Challenge the Most Interesting Man to outdo his annual kumquat & Malaysian jellyfish infused jam – and if he finds it interesting (and it’s legal), he’ll mix it into this experimental, soon to be released, gelatinous creation.

Click through for details on how to enter the contest on the Dos Equis site, and how to win a jar of The Most Interesting Jam In The World from New York Street Food.

The first thing you need to do is to go onto the Most Interesting Man’s Facebook page and suggest an ingredient for the jam.  So far there have been suggestions of the “adrenaline gland from a snow owl”, “tiger blood” (how original) and “a pinch of freshly ground nutmeg.”

The Most Interesting Man’s quest for ingredients will continue for 3 weeks in his Facebook video series. He will be selecting 1 winning ingredient from the submissions each week and adding it to the jam.

A second jar will be put up for auction on Ebay, with the proceeds donated to the Wombat Foundation – a charity handpicked by The Most Interesting Man.  We don’t know what will happen with the other 9 jars, but we expect they will be used to help wipe out some terrible disease!

To win this exclusive prize, you need to do four things:

1) Put your suggested jam ingredient in the comments on the Most Interesting Man’s Facebook page here.

2) Put the same suggested ingredient in the comments to this post.

3) If you win, you will have to taste The Most Interesting Jam In The World; and

4) You will have to take some photos and write a Guest Post for New York Street Food about the experience.

The winner will be chosen by New York Street Food based on what we deem to be The Most Interesting Ingredient.

Ask yourself: If Dos Equis’ Most Interesting Man in the World were to make a jam, would you be daring enough to spread it on toast?

You bring your stomach and we’ll supply The Most Interesting Jam In The World.  Just make sure you have a smooth, cold Dos Equis to wash it down…

Boost your energy at the office with perfect food chart

What Will You Be Eating in Dublin this Year? 8 Food Trends for 2015