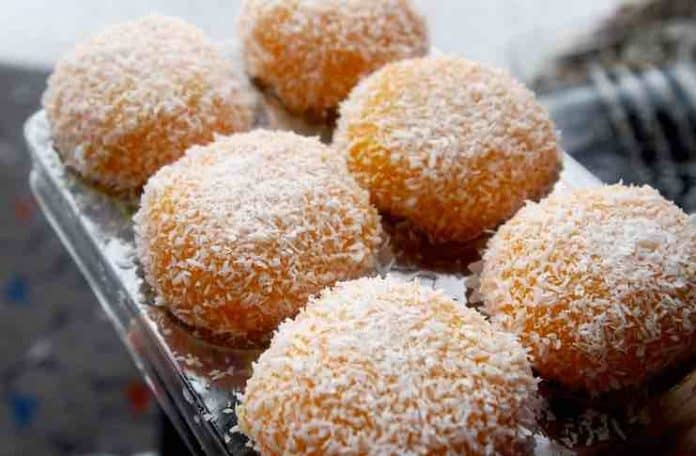 You might love Sushi and think you know all about Japanese food, but have you ever tried Mochi or Dango? Or maybe Arare? If you haven’t, and if you love sweets – then you definitely should.

The Japanese culinary world offers quite a bunch of unique and delicious sweets, usually with a rich tradition and history behind them. In some cases, Japanese sweets are created only to accompany the famous ritual of drinking hot tea.

In today’s article, we selected our top 10 favorite Japanese desserts. Be warned, you might want to book a trip to Japan after reading this, but you don’t have to. You can probably find better holiday packages in New York city – where you can also enjoy every single Japanese dessert.

Luckily, NYC is blessed with an incredible array of exceptional Japanese restaurants, where you’ll be able to find these top 10 Japanese desserts of ours…

When it comes to Japanese sweets, Mochi is one of its main staples. What is it? It’s a rice cake made of glutinous rice, which can be either steamed, boiled, or grilled. Mochi is prepared by pounding the rice into a paste, which is then modeled into a pretty shape.

One of the prettiest Mochis out there, is the Sakura mochi. It’s a pink cake filled with a paste of red beans, and wrapped with a sakura tree leaf.

In the past, hundreds of years ago, Imperial families in Japan used to celebrate the beginning of the year by eating Mochi, among other desserts.

While mochi is a delicious cake made from rice being pounded into a paste, Dangos are extremely tasty dumplings with a chewy texture. They are made from sweet rice flour, which is mixed with hot water, forming a dough which is then shaped into small dumplings. These are then boiled, skewered, and grilled. Taste a few Dangos with thick and sweet soy sauce, and you’ll be hooked for life.

Daifukui (big belly) is actually a small round mochi (it was even called in the past, centuries ago – ‘Habutai Mochi’) filled with an array of alternative ingredients. The most common ingredient is a paste of red beans. However, one of our favorites is Yukimi Daifuku, which is a Daifuku filled with ice cream (!). Daifuku usually come in two sizes, either small, or large – which is around the size of your palm. Our tip, go for the large one.

Manju is a unique and delicious confection that presents infinite varieties. The most popular one has an outside layer made from flour, rice powder, buckwheat, and plant called kudzu. The Manju is filled, like many other japanese sweets – with red beans paste. Other possible fillings include orange cream or chestnut jam. A Manju filled with purple sweet potatoes, called Okinawan manju, is very popular in Hawaii.

Love pancackes? Then you’ll love Dorayaki. It looks like pancackes, but is made from a special Nagasaki soft cake that was actually brought to Japan back in the 16th century by Portuguese explorers. And according to Nick, the owner of Your Coffee & Tea Essentials, this dessert is best enjoyed with a delicious cup of brown sugar milk tea.

The word Dorayaki is composed of ‘Dora’s and ‘yaki’, where the first means “gong”, which is the shape of this yummy dessert.

Arare are another unique and traditional Japanese dessert, which are designed to look like snow pellets. They are very smaller and can be either salty or sweet. Arare are great as a side for drinking beer.

During the Japanese Girls Day and festivals in May, very colorful arare are made, usually in pink, yellow and other girly colors.

This Japanese confection is one of the traditional sweets that became very popular as a souvenir.
Yatsuhashi, which is mainly common in the city of Kyoto, actually brings us back to the first Japanese dessert on our list, the Mochi. Yatsuhashi is made with mochi, sugar and cinnamon, and can have two varieties. One is baked and has a pretty hard texture, while the other is made from a steamed mochi.

Where to eat Japanese Desserts in New York city?

As said, you do not need to book a flight to Japan in order to enjoy these delicious sweets. New York has plenty of Japanese restaurants and bakeries that offer a very wide range of traditional Japanese desserts.

Want to read more of our posts? How about our post about the best Hong Kong Foods and Drinks you should try?