Even in the dead of winter, new food trucks appear!

The latest is a patriotic food truck called Yankee Doodle Dandy’s. It has the Statue of Liberty, the Constitution, and other Americana as the truck wrap.

Winner! Winner! is not necessarily our opinion of the food (you have to read to the end to get that), but it is the name of their most popular lunch special.

The Winner! Winner! lunch is basically 4 chicken tenders, fries, potato salad, and a piece of buttered toast(?) for $7.75.

The Winner! Winner! moniker might actually refer to the highest number of carbohydrates in a food truck lunch, but we digress. 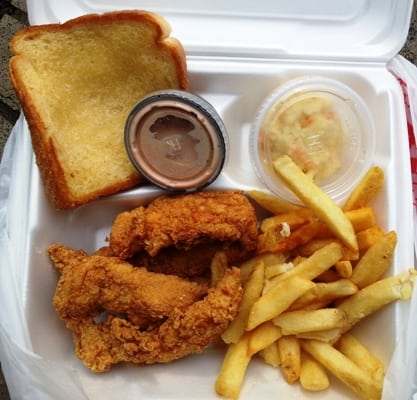 If you recall, there was another very patriotic NYC food truck a couple of years back called Our Heros. That truck had an eagle carrying a hero sandwich, but it had more of a 9/11 theme than a Founding Fathers theme.

The chicken fingers were nicely breaded and crunchy, two important factors in assessing chicken tenders. The breading was also peppery, which we personally like, but may not be to everyone’s taste.

Even more important, this was real chicken, not some processed stuff.

We tend to prefer skinny, crispy fries, but these were about average size. They appeared to be hand cut (i.e. not uniform), with a little skin on some pieces.

The potato salad was right up our alley, with an eggy and slightly sweet vinegar tang to it.

The fries were probably our least favorite part of the lunch, but they were not bad by any stretch of the imagination. We just liked the chicken and potato salad more.

The dipping sauce was very good. It was a ketchup, mayo and relish base, but was perked up by some interesting spices. We took their advice and used it for the fries as well as the chicken.

The Winner! Winner! from Yankee Doodle Dandy’s was a solid lunch from a new food truck in town. Sometimes it takes time for a vendor to find their sea legs on the NYC streets, but these guys seem to have their act down.

Next up will probably be their Buffalo Chicken lunch.