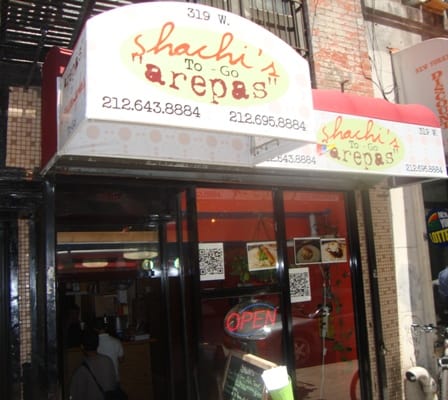 I saw a little item in the NY Times Tasting Table newsletter last week about a new little storefront near Penn Station called Shachi’s that serves authentic Venezuelan arepas and empanadas.  Now that’s something that will catch my attention!  We’re always looking for new places to add to our Honorary Street Food category, and Shachi’s, at 319 West 35th St (btw 8th & 9th Ave) seemed like a good candidate.

Inside the narrow space was one small table with 2 stools, but the menu looked really interesting.  There were 15 different arepas, 9 different empanadas, and 7 different entrees – and one of their lunch combinations is an arepa, an empanada and a soda for $9.  This sounded like a good choice for my first time there. 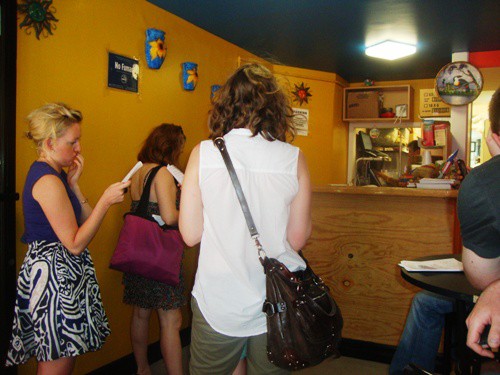 I asked the owner which arepa he recommended, and he said the most popular one was the Pabellon ($7), which has shredded beef, sweet plantains, black beans and cheese.  For the empanada, I went for pescado (shredded fish) which costs $2.50 by itself, but on the combo, I got each of these and a soda for $9.  Oh, and they included a red hot sauce and a green, herby sauce with lunch. 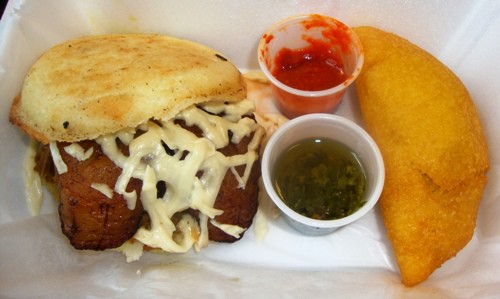 Everything is cooked from scratch, so it took about 10 minutes to get lunch.  It was still very hot when I got back to my office and started with the arepa.  The shredded beef, sweet plantains and shredded cheese was an interesting combination of flavors – and I mean that in a complimentary way.  The plantains were soft and sweet, but there wasn’t much spice to the sandwich, so I added some of the red hot sauce.  This brought the beef right back into the mix of flavors.

The “bread” was difficult to describe, but it was more like a slightly fried dough pancake.  It was a little bit oily, but not nearly enough to be a problem.

The empanada had a corn-based dough as opposed to the flour doughs I usually see on empanadas.  This made it a bit thicker and heavier than most of the empanadas I’ve had in the past.

The filling was shredded fish, which was pretty good, but a little saltier than I expected.  It was spiced ok, but I put on some of the green sauce, which added an herby dimension to the empanada.

Shachi’s is perfect for our Honorary Street Food category, and I will add it to our map and directory.

This is authentic Venezuelan food, and I’m definitely looking forward to trying some of the other arepas and empanadas, such as chorizo & cheese, ham & cheese, chicken/potato salad/guacamole and several others. 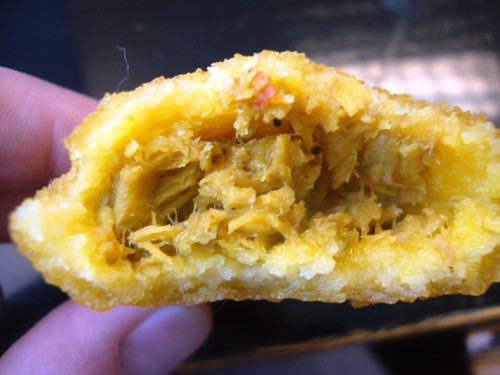