Home Healthy street food A Short Guide to an Age-old Classic: The Potato 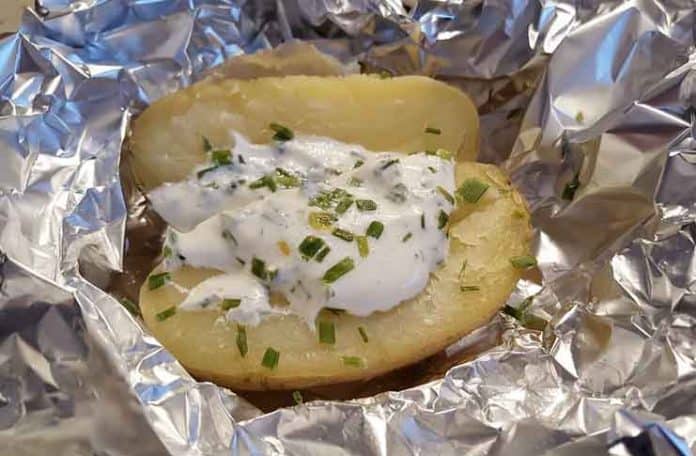 One popular street and fast food item that you can never go wrong with is the baked potato.

The potato itself has an interesting history, having evolved from a family of poisonous plants (also stemming, later, into tomatoes, peppers, and tobacco). Originating in South America, civilization and cultivation eventually carried the potato long distances.

Unfortunately, this wonderful root vegetable was considered a staple of the poor class for a long time. In 1600s Europe root vegetables weren’t common and most people were suspicious of the potato – even thinking it evil!

Luckily, the potato became popular with military groups, as an easily kept and easy to cultivate food option. It could travel long distances without spoiling.

In the 1700s Europe began to mass-produce crops of potatoes. It became such a staple that the Great Famine in Ireland during the mid-1800s resulted in about one million people dying after a disease wiped out the crop.

Although it’s become known as a classic American comfort food, the United States was actually one of the last countries to catch on to the potato as a versatile and delicious dish.

These days you can find potatoes in recipes across all cultures. They’ve been elevated to high-class, gourmet cuisine, and are also enjoyed as quick dishes sold by street vendors. They’ve even made their way onto fast food menus as a healthier option; check out Wendy’s menu at Pricelisto for current prices and variations on this delicious classic. Here’s a quick and incredibly easy recipe for the basic baked potato:

It really couldn’t be more simple.

Pre-heat an oven to 350 degrees and position the racks in the middle. Wash the potatoes – if there are a lot of over-grown eyes, you can pop them out easily with a knife.

Use a fork to poke holes all over the potato. This will release pressure and allow it to cook quicker.

In a bowl, lightly coat the potatoes with salt and oil. Place the potatoes on a baking sheet covered in tin foil – or wrap them, individually, in tin foil and put them directly on the oven racks.

Bake for an hour, or until a fork can be easily pushed through the skin. The flesh should be firm but able to be broken. Cut the potato in half and serve with your desired toppings!

The beautiful thing about baked potato toppings is that they can be pretty much anything you want. There’s no right way to top a potato – although the simple salt and pepper/butter combo is always a delicious start.

Consider using leftovers for toppings, as well. We’ve mentioned chili and mac n’ cheese, as well as pulled pork or chicken. Leftover BBQ and side dishes are a great way to top your potato.

Hint: For a slightly healthier choice, bake a sweet potato. They have higher nutritional content with more fiber, Vitamin A, Vitamin C, and Vitamin B6. Hopefully, you don’t mind the slightly sweeter taste.

If you’re interested more in a side than a main dish, here’s a quick and easy mashed potato recipe, taking it back to the basics:

Wash the potatoes and cut them into 1inch by 1inch cubes. Bring a large pot of water to a boil, and cook the potatoes until a fork is easily inserted.

Hint: Keep the skin on! It might be tempting to peel the potatoes, but not only does this take more time, it actually gets rid of a lot of the nutrients, which are found in the skin. Learn to love it!

Once the potatoes are finished, drain the water from the pot. Use a potato masher to break down the cubes a bit. At this point, cut up the butter, throw it in with the potatoes, and add about a ¼ cup of milk.

Hint: Whether you’re dairy-free or just like experimenting with milk alternatives, using almond milk or oat milk is a great way to add variety to your diet and change the texture of this dish. Oat milk tends to be thicker and will add a creamier consistency to the potatoes.

Continue to mash the potatoes, adding a bit more milk occasionally until the desired texture is reached. If you like your mashed potatoes chunky, cut back on the milk and mashing. If you like them creamier, consider using a beater or whisk.

Salt the potatoes to taste and throw your own toppings on – bacon and scallions are great for a bit of garnish and flavor!

Hint: Mashed sweet potatoes are always an option as well, but they’ll take a bit longer to bake and will have a sweeter flavor in the end. Great topped with marshmallow, maple syrup, or a bit of brown sugar.

And if you’re visiting NYC and crave for one, check out the Potato House.