I was looking through some of my past lunches and realized that I haven’t had chicken over rice from Carnegie John’s in over 6 months.  That’s a long time since having one of my favorite street food lunches.  Time to rectify the situation.

Today’s Lunch is chicken over rice ($6) from Carnegie John’s cart on West 56th St, just east of 7th Ave, (right behind Carnegie Hall).  Would it be as good as I remembered?

Carnegie John’s is always busy at lunch, even on rainy days, which today isn’t.  It’s a beautiful day, and there were a bunch of people who had already ordered and were waiting for their lunches – and several people got on line right behind me too.  I don’t know how he does it, but John usually has at least half a dozen orders going at once, and pretty much keeps everyone’s order straight – burgers, chicken over rice, sausage & peppers and more. 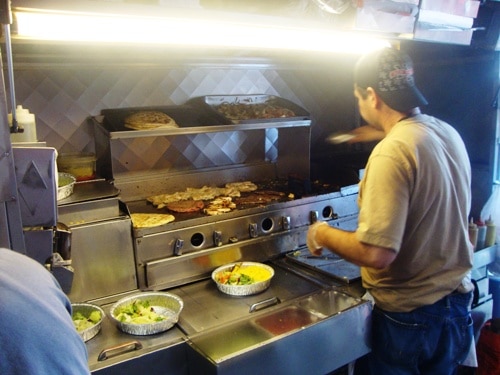 I ordered chicken over rice, which come with a side salad.  If you’re not familiar with Carnegie John, there are a few things that set him apart from most other street vendors.

John uses only whole white-meat chicken breasts, which are rubbed with his own blend of spices.  Using chicken breasts ensures there is no funky stuff like fat or gristle in the meat. He also has a charcoal grill in addition to the griddle, so the chicken has that charcoal grilled flavor. 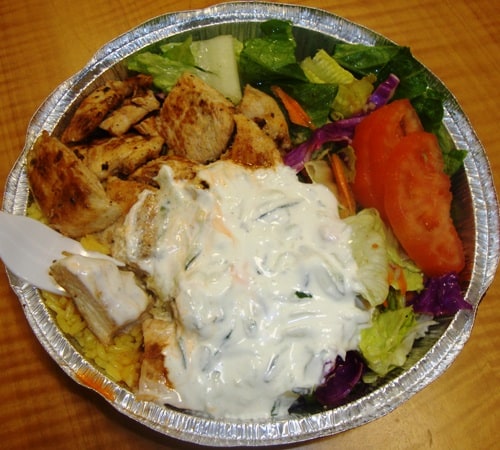 His white sauce is real tzaziki sauce made with yogurt and cucumber.  It’s much thicker and better than the mayo-based white sauces used at most of the halal carts.  Healthier too.

Even the rice and salad is good.  He has yellow rice with a soft, buttery taste, although it could have been cooked a little less.  Still, it tasted pretty good.  The salad was lettuce, tomato and radicchio with a light Italian-type dressing that was nice and refreshing at the end of the meal.

Today’s Lunch gets a 9 out of 10 for all the reasons mentioned above.  The only downsides were the rice could have been cooked a little less, and his hot sauce isn’t that hot.  All-in-all though, Carnegie John has one of the best chicken over rice dishes out there. 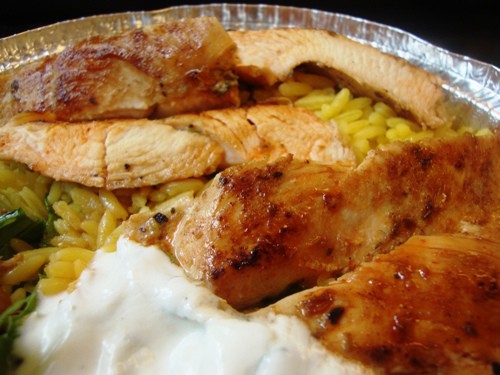 Checking Out The Chicken Over Rice at XPL