If you are like me, then any time you have seen the phrase “cream of tartar” you have scratched your head and wondered what in the hell it really was, anyway.

Most foodies I know couldn’t tell you anything about cream of tartar or what it is really used for – and truth be told, I always think of “tartar sauce” when I hear it.

And let me tell you, after being fed frozen fish sticks with tartar sauce as a kid, over and over, it isn’t the most pleasant recollection or association.

So, what’s the deal with this stuff? What is it and what is it used for? 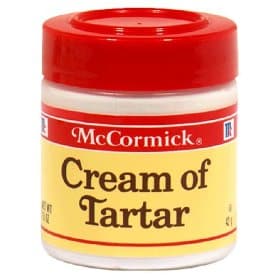 Cream of tartar is a fine, white powder lacking any real odor that is used in various recipes. However, it is most commonly associated with meringue pies and meringue toppings.

So, how is it that a powder referred to as a “cream” is used to make pies?

If you put a meringue topped pie in an oven and you do not use cream of tartar, you will quickly discover that the pie will not hold up under the heat. This special ingredient allows a baker to get that nice golden brown coloring to the pie while maintaining the shape and integrity of the pie structure.

Otherwise, you would be left with a topping that has melted away and exposed the inner ingredients of the pie. Not so good.

Additionally, the powdery ingredient helps to stabilize egg whites when making the meringue to create the topping. So not only does it aid in heat tolerance, it helps maintain a delicious texture when whipped up by the chef.

When you beat egg whites, proteins in the whites unfold from their natural shape and become tangled with each other. At the same time, you are beating air into the whites, forming small bubbles. The protein molecules become attached to each other through chemical and electrical bonds that reinforce the skin of the air bubbles. Over time, these bonds can pull the proteins closer together, forcing out the water trapped in the surface of the bubbles. Eventually, the proteins pull themselves together so strongly that compact, grainy protein lumps form and the liquid pools in the bottom of the bowl.

The cream of tartar prevents the formation of chemical bonds between protein molecules.

What’s in a Name?

I am sure that some of you reading this want to know about this whole “cream of” component to the ingredients name.

Like we already established, it is a powder, so it doesn’t really make sense to refer to it as a cream. Well, I searched online for an explanation and couldn’t find a decent one worth sharing.

My only guestimation is that it refers to the consistency it provides when used in making various items. It tends to make meringues, toppings and syrups a little smoother.

Scientifically speaking, cream of tartar is derived from the chemical compounds that form the ingredients. The chemical name is potassium bitartrate, or potassium hydrogen tartrate, hence “tartare.”

Believe it or not…cream of tartar is a by-product of wine production that occurs during the fermentation of grape juice. It adheres to the side of casks in the form of a crust known as argol, which when purified forms the white crystals known as cream of tartar.

It is scraped off of the sides of the barrels and then cleaned and ground to form cream of tartar.

Other Uses for Cream of Tartar

There are other food uses for cream of tartar, including stabilizing whipped cream, preventing discoloration of boiled vegetables and the activation of baking soda in some cake recipes.

It also prevents sugar syrups from crystallizing and can be considered a salt substitute for some purposes.

Some domestic divas swear by it for homegrown cleaning solutions when it comes to shining up and cleaning metals and porcelain. You can create a cleaning paste when you mix it with lemon juice, white vinegar or other acidic complimentary liquids.

Supposedly, you can also remove rust from metal items, but I have no experience in this area.

So there you have it. We think we have given you all you need to know, but if you really want more info we suggest you check out Tartaric.com.