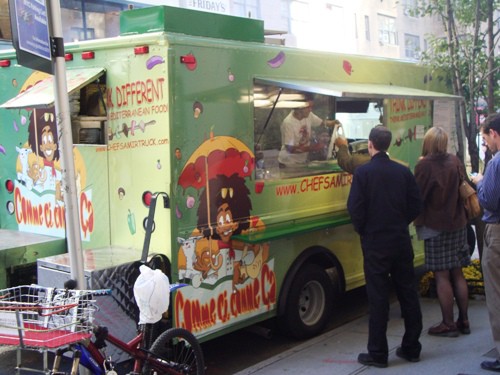 I saw on twitter that Chef Samir was back on the street with the Comme Ci, Comme Ça Truck.  This was one of the more promising new trucks in the middle of the summer, but misfortune has reared its ugly head a couple of times, and they have only been on the street sporadically since then.

The first time I had cous cous with beef, when the guy in front of me ordered the last cous cous with merguez.  It was pretty good, but I really love merguez sausage, which is made with lamb.

There was a line of about 6 people at the truck, another 6-8 waiting for their orders, and a bunch of people came up after I ordered.  Glad to see the ol’ twitter machine is working.

There was a large amount of merguez sausage grilling over flames, and it seemed to be what many people ordered. 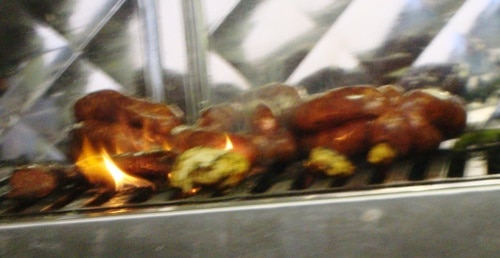 The first thing I noticed after opening the sandwich was that great smell of flame-grilled sausage, like it was the middle of the summer again.

The hero roll was about a foot long and it was very soft.  Inside were 4 links of merguez sausage with a mixture of grilled onions, tomatoes, green peppers and green olives on the roll.  What appeared to be an olive mayo spread was also on the bread.

The pepper, roasted tomato, and olive mixture was a nice complement to merguez sausage, similar to how onions and peppers complement Italian sausage.  I’m not usually one for olives, but they added something nice to this sandwich.  I also don’t like tomatoes, but these were so roasted and mixed in with other ingredients, I didn’t even notice they were there.

Today’s Lunch gets an 8 out of 10.  The hero bread was a little too big for the fillings – I got more bread on each bite than I really wanted, but it was really soft bread.  The merguez wasn’t spicy, but it was tasty.  The onion, pepper and olive mix was really good, too.

Welcome back Chef Samir.  I look forward to enjoying more lunches from the Comme Ci, Comme Ça Truck.  Please try to keep yourself and your crew off the injured reserve list! 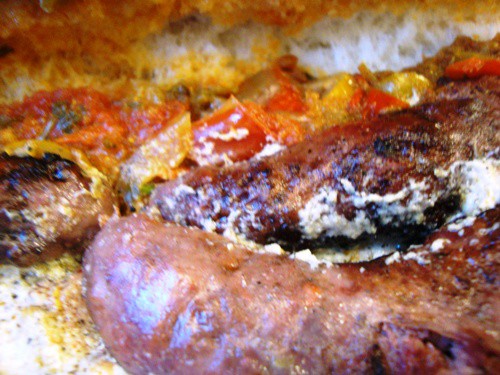