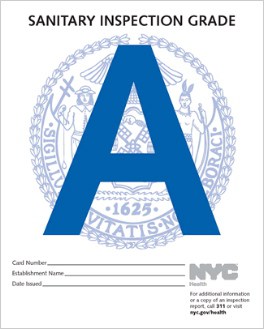 The NY Times had an interesting article yesterday on the great equalizer of restaurants: the health department tribunal, a little-publicized court system that metes out penalties for violations of the city sanitary code.

“It has been there for years, in a nondescript government office in Lower Manhattan where more than a dozen administrative law judges escort their charges into cramped rooms and hear them wrangle over infractions, in a ritual reminiscent of visiting the principal’s office.

But in the weeks since the city adopted a new system requiring restaurants to post large, brightly colored letter grades rating their cleanliness and safety, the tribunal has become a high-stakes food court of last resort where hundreds of restaurant owners and their representatives trudge each day to defend what they say are their very livelihoods.

Whether from Dunkin’ Donuts or Le Bernardin, whose case was called last week, they stand in line behind two strips of grimy gray tape on the floor to check in at a reception desk. Then they wait, sometimes all day, to defend their kitchens, many in hopes of nudging a humiliating C up to a bearable B, or turning that middle-of-the-class B into a gold-star A.”

Click the link to read the rest of this fascinating glimpse into a little-known part of New York. [NY Times]