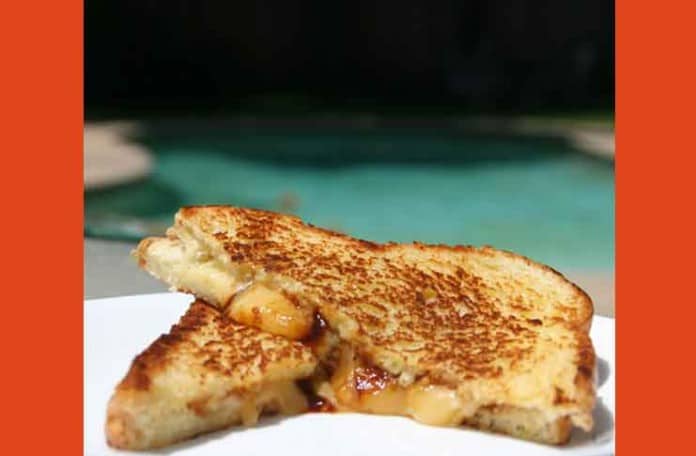 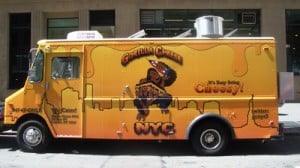 I had to talk to James from Gorilla Cheese NYC about the Amazing New York Food Trucks 2012 Calendar, and he had a new special this week – a cheesesteak melt – which gave me a perfect excuse to head over there.

While I was waiting for the sandwich to be cooked, James asked me to try a new version of his mac & cheese, so that was Today’s Lunch: a grilled cheesesteak melt ($7) and a side order of macaroni & cheese ($3.75). 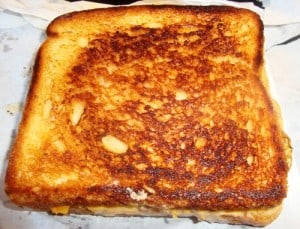 The sandwich was sliced rib-eye steak with sauteed onions, American cheese and a little ketchup on French bread.

The first few bites had that great combination of grilled steak and gooey cheese.  A couple of bites in, I started getting sauteed onions in the mix, and a touch of ketchup.

With such tasty sauces at the truck, I was surprised to see ketchup on the sandwich. I’m not a big fan of ketchup on meat, but a little bit on this sandwich rounded out the overall taste.  I’m glad they used it sparingly, because too much ketchup would have been a disaster.

After eating some of the sandwich, I opened the macaroni & cheese container.  The mac & cheese was made with gruyere, fontina and cheddar cheese.  Gruyere, like Swiss cheese, can have a bite, but the mac & cheese was smooth. I bit into it, but it didn’t bite back.

There was some black pepper in the mac & cheese, and something that mellowed it out.  I think it was nutmeg, but don’t quote me on that.  Whatever it was, it added a nice flavor. 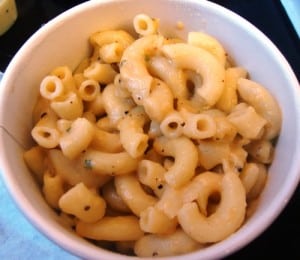 Today’s Lunch from Gorilla Cheese was very tasty, but what would someone from Philly think about it?  I guess that depends on how open-minded they are.

The cheesesteak melt from Gorilla Cheese was not your classic Philly cheese steak sandwich, but it was meaty, gooey, grilled and enjoyable. That’s good enough for me.