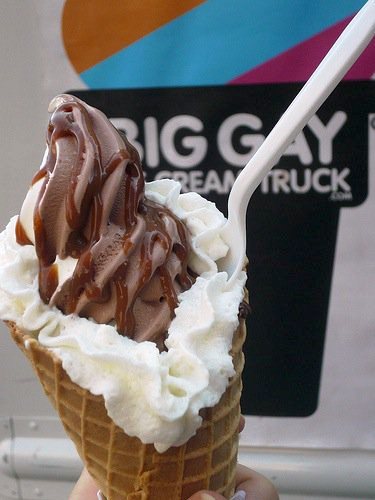 Last night we went to see John T. Edge (above, right) speak about his experience in making The Truck Food Cookbook.  The event was put on by Doug (above, left)  & Bryan (above, arms) of the Big Gay Ice Cream Truck & Shop.  When the Big Gay Ice Cream guys are involved, you never know what to expect.

A talk about food trucks in a funeral home. Check.

Our hostess, Bambi Galore, dressed as a sundae. Check.

A flask being passed around. Check.

Interesting talk and conversation about street food.  Of course!

Since the Big Gay Ice Cream Shop was too small for this event, they spoke to their neighbor on the block, and we were able to use the rectory of the funeral home two doors down.  That accounts for all the stained glass, and the gothic atmosphere.

John spoke about some of the people he got to know on this cross-country exploration, the street food scenes in various cities, and assorted other tidbits, such as sort of being held hostage for an hour by a commissary owner. (Now he knows how the vendors feel.)  Then John took some questions before we all returned to the BGIC Shop so he could sign some books.

If you haven’t heard about The Truck Food Cookbook, James Beard award-winning author John T. Edge spent a year traveling around the country collecting stories and recipes from street vendors in fifteen different cities. Twelve of the cities made it into the book, as did 150 recipes from the vendors!

This all sounds deadly serious, but maybe that was just the funeral home setting.  One of the points John made is that while he takes the food seriously, a lot of it is about having fun and sharing food with the people you meet along the way, whether they are serving tacos for $1.50 in Houston, or foie gras out of a tricked-out food truck in San Francisco.

Last summer we got to share some street food with John at the Vendy Awards, where he was a judge and we were a sponsor.

Last night, we enjoyed listening to him talk about street food in a funeral home with a bunch of other people.  Our suggestion – order the book here.  The Truck Food Cookbook is fun and interesting reading, and has great recipes too.  What more could you want? 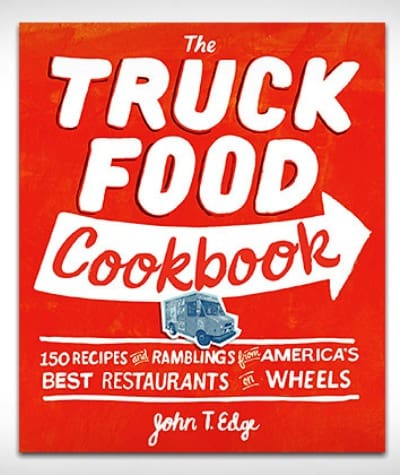