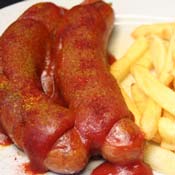 Currywurst has become a national obsession in Germany, and particularly in Berlin, where it was believed to have been invented.  In 1949, Herta Heuwer, a German housewife in post-war Berlin, obtained curry powder from some British soldiers, sprinkled it on some German sausages, and voila, currywurst was invented.

Nowadays, currywurst is a hot pork sausage, sometimes cut into slices, and covered in curry sauce and curry powder.  Over 17 million currywurst are sold each year, and it is usually eaten as street food or take-away all over Germany.  There is even a Currywurst Museum.