We don’t usually go to the huge food trucks events because the lines can get ridiculous.  Who wants to wait on long lines for food, drinks and dessert all day, especially on a holiday weekend with sunny weather in the mid-70’s?  Not us.

We try to show up early because the lines at these events always increase as the day progresses.  We were on the 12pm ferry and got to Parked by around 12:20 – and it was already very busy.  By the time we looked around to see where everyone was, the lines we already quite long, the longest being the Red Hook Lobster Pound.

Even the shortest line took about 40 minutes, but while we were waiting, someone in front of us got a “chicken & waffles” cupcake from a friend who just came from Robicelli’s.  They said it was pretty interesting, and would have been excellent if the chicken was hot, but it was lukewarm.  It was also $4, which seemed like a lot for a piece of fried chicken on a small cupcake.

By the time we got to the Green Taste Truck window, the only kathi roll they had left was paneer masala.  The guys just in front of us got the last chicken anda kathi roll (chicken and egg), so we took the last paneer kathi roll, a chicken tikka masala and a Snapple, and headed to the waterfront.  I’m sure they made more later, but it was really hit and miss in terms of what they had at the time.

We found a nice spot on a small patch of grass by the bike path with a great view of the Statue of Liberty, Ellis Island and downtown Manhattan.  Even Jersey City looked nice today.

The paneer masala roll was very nice, with paneer cheese, potato and red onion in paratha bread.  The chicken tikka masala was decent, but not earth-shattering.  I definitely prefer their kathi rolls, and was disappointed that service was so hit-and-miss.

As far as the Desi Truck, the original yellow one is at 27th & 5th during the week, and the owner said the Green Taste Truck will be at 39th & 6th full time for lunches during the week. 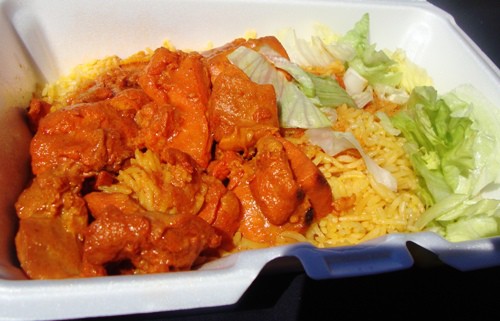 There really wasn’t any point in going back to Parked to wait on line for an hour for something else, so we walked around Governors Island, which was very enjoyable, and when we wanted a drink, we went over to Water Taxi Beach.  The line for food there was also about 45 minutes long, but we had already eaten – and the line for the bar was only 10 minutes!  Score!

We got a couple of drinks, went over to a picnic table, took our shoes off, and hung out on a beach with our feet in the sand and a gorgeous view of downtown.  The only downside to Water Taxi Beach was an abundance of yellowjackets.  They really liked my wife’s drink, and started to get annoying after a while, so after 2 drinks, we walked around Gov Island some more, then headed back to Parked to see meet someone from RTL Television (Holland) who recently contacted me about being their “street food expert” for an upcoming segment on the Vendy Awards.

Parked was still stalled.  The lines were even longer then when we left 2 hours earlier, and there was no point in getting on another long, slow line.  We met Felicia from RTL Television, talked for a while about New York Street Food, the Vendys, and other assorted topics, then headed for the ferry home.

What can we say about Parked?  I’m sure it was great for the vendors, every one of which had long lines all day, but it was terrible for street food fans.  All we can say is Parked was probably the best advertisement for Water Taxi Beach they could have.

OVER 30 VENDORS COMING TO PARKED AT SOUTH STREET SEAPORT ON...