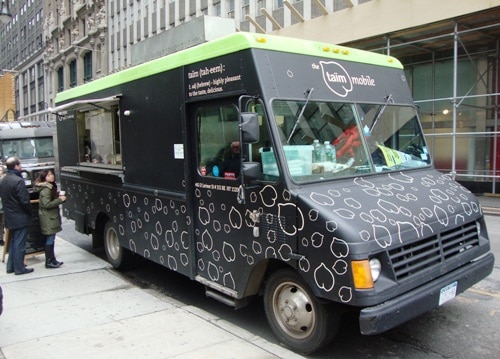 One of the shining stars of the New York food truck renaissance is Taim Mobile.  Taim started as a restaurant in Greenwich Village, and then opened a food truck, which is the reverse of the usual scenario.

Taim’s falafel was called the best in NYC by Serious Eats, and while the best of any food type in NYC is a hotly debated issue, there is no doubt Taim’s falafel ranks among the very best.

We caught up with David Shapiro, one of the partners in Taim Mobile, who was nice enough to listen to our questions and give thoughtful, detailed answers.

NYSF: When did the Taim restaurant open, and when did Taim Mobile first hit the street?

TAIM: The restaurant opened in Summer 2005, and the truck opened around Thanksgiving weekend 2010.

NYSF: Can you give us a little background on the people behind Taim?

TAIM: The husband and wife team of Einat Admony, an Israeli chef (A Patria, Bolo and Danube among others) and Stefan Nafziger, a Frenchman.  They met when he was a captain at Bouley and she worked in the meat station at Danube.

TAIM: Stef & Einat had thought for a year or two about doing a truck, but after the birth of their 2 children and with their new restaurant Balaboosta under construction, it began to seem unlikely for them.

In the meantime, I was working in finance, and with my office in midtown, I really started to notice the food truck phenomenon. I thought it was so cool that the trucks took their food around the city, really getting to interact with people from every neighborhood. I also loved the way the days and weeks would pass by one food truck day at a time. Mondays this truck, Tuesdays that one, Wednesdays another…

And of course, the lines proved to me that there was demand for the concept (provided the food was good, of course). So I set out looking for some food professionals to partner with. After a short while, during a conversation with my friend Nektarios Ioannidis, Nektarios suggested that he knew the perfect match– Einat & Stef, whom he had known for years. Nek swore up and down that their food was the best of the best and within no time, we all agreed to give it a go together.

NYSF: How long did it take from the initial idea of Taim Mobile to actually serving people?

TAIM: We first sat down in very early January 2010 and spent the first month or so just brainstorming general ideas and concepts, and kind of testing the waters to see how compatible we all were together. You know, like first and second date kind of stuff.  It took a while for us to figure out our partnership structure and then some more time to lay out the logistics, our goals, etc.

By early last summer, we had bought a truck and were doing research for the build-out and the design.  We finally opened in November. So from the birth of the concept to the opening day was around 10 months.

NYSF:  What was the toughest part of bringing this to fruition?

TAIM: The toughest part was figuring out the logistics– figuring out where to prep, setting up a kitchen, getting the truck loaded and unloaded every day with the right amount of food for the day, hiring the right staff, etc. 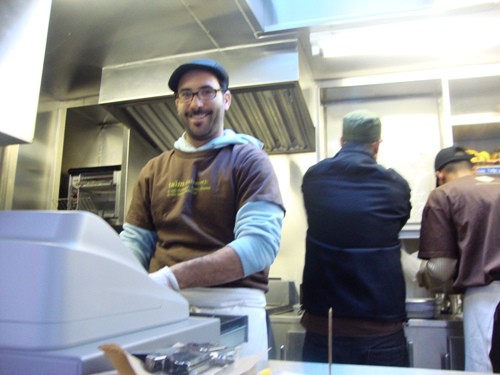 NYSF:  Where did you get the truck from, and how long did it take to get it into the look and working shape that you wanted?

TAIM: We actually bought a used Snap-On Tool Truck on Ebay and had it driven up from Virginia. We then designed and constructed a kitchen inside exactly how we wanted it.  Basically we used the layout and design of Taim as a model for the truck. Since the truck is such a confined space, there were really few options to get creative and so the most logical thing for us to do was to try and replicate the bricks & mortar set-up. We basically knew what we wanted from the beginning.

As for having the truck in the working shape that we want, well, I can only say that the truck is like any business – it is a work in progress. Every day we decide that we want to add something new–an awning, new speakers, a new shelf, etc. But for the most part we have been lucky to only have to focus on these kinds of minor of things.

NYSF: There are many good options for falafel on the New York streets, but you’ve been successful pretty much from the beginning, with long lines and generally excellent reviews. To what do you attribute this success?

TAIM: I think that first and foremost we owe everything to the success Taim has had over the past 5 years. They have a cult-like following. The food is amazing, the falafel is the best in the city by far, people love the food and come from all over to eat it, and people love the vibe of the place and what it stands for.

I remember last summer I was outside Taim and a Smartcar pulled up with a middle-aged couple inside. They parked at the fire hydrant outside and came in for a quick bite to eat. The husband told me that they were driving from Maine to Chicago in the Smartcar and decided to pass through NYC, only to eat a falafel at Taim! So I think it was inevitable that we would have a warm welcome right from the outset.

Secondly, I think people are really into the food truck movement in general. And what’s not to love, really? The trucks serve some of the best food in the city, we bring the food to the customer, and rotate around the city, spicing up peoples’ daily lives both literally and figuratively.

Also the trucks’ use of social media really enables us to interact with our customers in a way that they want to be interacted with…directly, in real time, through public conversation (ie Twitter). This kind of platform really helps to spread the word fast (if the word deserves to be spread).

NYSF:  Taim has a special falafel each week. Do you have plans or ideas for any new menu items or weekly specials?

TAIM: For the truck, we basically took Taim’s menu and simplified it.  We had to cut some items out like babaganoush and beet salad, which are extremely time and labor consuming. Also, we decided to keep on the menu only one kind of falafel, the “green”, but to rotate the other flavors (red pepper, harissa) as specials, along with sabich (NYSF note: our personal favorite) and some other falafel flavors not offered at the restaurant like kalamata olive falafel, tomato thai-basil falafel, and spinach-jalapeno falafel.

We have some new ideas—for example porcini mushroom falafel, sundried tomato falafel and pesto falafel.  We are always trying to be creative!

NYSF:  Your smoothies are delicious with interesting combinations (date/lime/banana, strawberry/raspberry/Thai basil, pear/mint/lemon and more). How do you come up with the flavor combinations, and can you tell us if you have any new combos in store?

TAIM: We added a gourmet twist to the falafel, so we did the same thing with the smoothies.  We wanted something a little bit more tempting than the usual run-of-the-mill smoothie selection.  We really haven’t given much thought to adding or changing the smoothie menu, but with the weather being so hot recently, it might be a good idea to consider it. 🙂

NYSF:  What advice would you give someone who wants to open a food truck?

NYSF:   Is there anything else you would like to say to New York Street Food readers?

TAIM: I wanted to thank NYSF and all the readers for their coverage and support for us. Since Day 1, you guys have been out there on the streets enjoying our food, and on the internet talking about it, and giving us even more encouragement. So in many ways without you we wouldn’t be here!

THE FRYING DUTCHMEN WILL BE COOKING IN NYC VERY SOON