We’ve been looking around the web, and found two more new food trucks coming to NYC in the next month or two.

In addition to new trucks we mentioned a while back from Red Hook Lobster Pound and Milk Truck, Grub Street found the Gorilla Cheese NYC Truck.  Here are their website, twitter and facebook accounts.

GCNYC will be hitting the streets in the middle of April, with creative grilled cheese & tasty comfort food made to order.  They will offer several types of local breads such as white, wheat, rye, multigrain, and our favorite, challah.

There’s the Classic (American cheese on white), the Brooklyn Special (asiago & proscuitto on inside-out panini with aioli), mac & cheese with ginger dip, and much, much more.  The very interesting full menu can be found here.

Midtown Lunch reports that Crisp, the falafel restaurant with 2 locations in midtown and one downtown, is coming out with a food truck within the next 2 weeks.  It will be called Crisp On Wheels, and their website is here, twitter is here, and facebook is here. 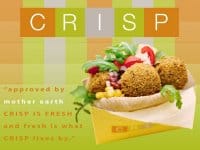 Crisp is all about fresh ingredients and eco-friendly packaging.  They have falafel burgers, bowls and sandwiches, with about half a dozen choices in falafel sandwiches and salads such as classic, Mexican, Mediterranean, African, Greek and French.  Their full menu can be found here.

Both Gorilla Cheese NYC and Crisp On Wheels have been added to our Mobile Munchies twitter feed, so you can track their progress and find them both in the same place.  We will keep you informed as well.

Are These The 3 Most Popular Street Foods in NYC?

IF YOU WANT SOME SYC FCKS, GET TO FEED YOUR HOLE...