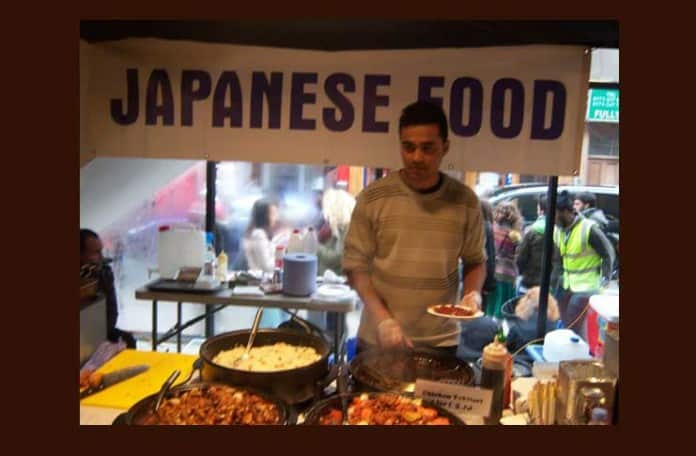 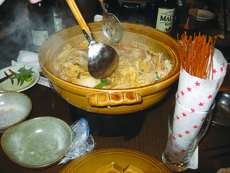 Many students spend their spring breaks in faraway locations with interesting cuisines.  Alex Chen, a student at NYU’s Stern School of Business, shared some of the Japanese foods he encountered on the Stern Japan Trek.  Below are excerpt of the Japanese street food he ate. (NYSF Note: Only the middle picture relates to the text. The other pictures are from non-street food meals.)

“In Osaka, we got to experience various forms of Japanese street food. One of the specialties there is takoyaki, or octopus balls. Chunks of octopus are encased in a round ball of fried batter, and covered with a sweet brown sauce, Japanese mayonnaise, and shaved dried bonito flakes. Imagine a savory octopus donut hole. The flavor is complex in a good way, and the texture has interesting contrast between the crispy outside of the ball, chewy octopus chunks, and gooey center. 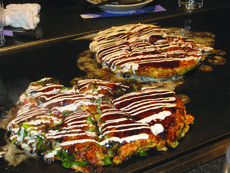 Another Osaka street specialty is okonomiyaki, which is often called “Japanese pizza”. The dish is flat and round, similar to a pancake, and contains green onions, cabbage and a variety of fillings including vegetables, meat, and seafood. It is similar to takoyaki in taste and is served with the same combination of brown sauce, mayonnaise, and bonito flakes.

Also popular as street food are skewers of a variety of meats and vegetables. Chicken, pork, squid, octopus, and other items are grilled or deep-fried, stuck onto a stick and are ready for consumption. I enjoyed the kushikatsu, which is a general term for deep-fried meat skewer. I had a skewer of alternating pork medallions and leeks, encased in a crispy breaded and deep-fried outer shell, served with a tangy Worcestershire-based sauce. 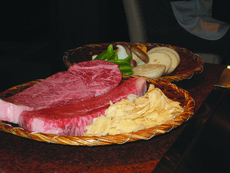 I’ve found that Japanese cuisine is reflective of the Japanese culture as a whole. Simple, clean flavors stem from fresh ingredients, with great care and precision taken in both preparation and presentation. Ingredients are not overworked, allowing the natural flavors to shine through. But of course, not even the Japanese can resist the temptation of a crispy, deep fried treat on a stick to go with their Sapporo beer. I didn’t enjoy everything that I ate on the trip (whole anchovy tempura was too much for me), but it was a wonderful experience and an interesting insight into the eating habits of the Japanese people.” [Stern Opportunity]

How Was Our Yakisoba Noodles Dish at Okadaman?