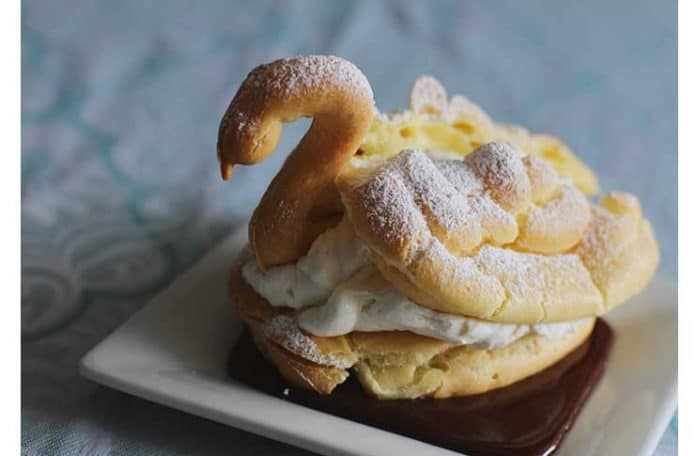 We all know and love the decadent, delicious, creamy flavor of a cream puff, but most of us just buy them ready made from a shop. However, cream puffs are easy to make, and, if you are willing to pick up the challenge and try to do them yourself, you will have the opportunity to take the simple cream puff to an entirely new level of elegance. In fact, making a swan body is a relatively easy thing to do, so you should definitely not be intimidated by the challenge.

All we will be making is putting together two relatively simple recipes, the one for the puff dough and the one for the cream. Each recipe though will have something a little bit special to take it to that next level.

For the puff themselves the bit that is a little out of the ordinary is the fact that we are going to save a little bit of the dough to make the necks and heads of what will be our swans. Before we begin, here are the ingredients you will need:

The first thing that you will want to do is to turn on the oven and begin pre-heating it to 425 degrees F. It is very important to have the oven well into the 400 degrees range before you put the dough in so that you will get the hollowed out bodies of the swans. So this is a step you should not skip over or ignore.

While the oven is heating up you can start heating up the butter with the water in a pot on medium to high heat. As soon as the butter is melted we will drop in the flower and just mix it in, and, because the water and butter mixture is hot, you will get something that looks like an oily dough in just a few seconds. Next, take the pot off the heat and add in the sugar and mix it in. Once that is done just let the dough rest for about 10 minutes before you add in your first egg. Start mixing the dough and the egg together and do not worry about the fact that in the beginning they will seem completely incompatable and unwilling to mix. Just keep stirring in, and you will see that little by little that egg will almost be soaked into the dough. Once the first egg is completely absorbed dump in the second egg and mix it in as well.

With your dough done you can go ahead and take a little portion of it and start drawing large, delicate S-s on a baking sheet. We are going to make about 10 swans, and since it is fairly difficult to estimate how much dough you will need for the necks and heads you should definitely start with the heads. You can use a frizzer bag that you have cut one of the corner off of, but make sure to make it a small cut. Once you have your necks, you can make the cut a little bit bigger and start making the bodies. As you would expect the bodies themselves should be about the same size as a cream puff, or a little smaller perhaps, since they will rise as they cook in the oven. Make sure to put the cream puff bodies on a different tray because you will have to keep them in the oven for about 25 minutes, while the necks only require 10 minutes. So after about 15 minutes of having the puffs in the oven, you can put in the swan necks as well and let them cook together. After another 10 minutes you should turn off the oven and just ever so slightly crack the door of the oven open. Leave the puffs in the oven with the door barely opened until they are completely done and, in the mean while move on to making the cream

The vanilla bean cream is even simpler to make than the puff pastry. All you need are the following ingredients:

Start by mixing in the egg with 2 other egg yolks in a large mixing ball. Add in the salt, sugar and corn starch and start mixing them in. You may notice that the resulting cream will be a very dark, almost orange shade of yellow, but, as you keep mixing it will turn a much paler shade to almost white, and that is when you know you can stop and move on to the next step.

This will probably be the most exciting part of the entire process because, instead of using vanilla extract from a bottle, we will be using a vanilla bean. It is a fairly dry, thin bean, which is why you will need a very sharp knife, ideally a sushi knife, and just cut the bean right down the middle. Next use the blunt side of the knife to scrape off the dark goo that you will find on the inside of the bean. Mix that with the milk in a pot and bring them to boil. Once the milk has just started to boil take it off the heat and slowly mix it in with the egg, sugar and corn starch cream. Make sure to put in just a little bit of the milk at first and then slowly add in the rest. With that, put it back in the pot and set it on the stove on low heat and just keep mixing until it turns into a cream. As soon as your vanilla cream reaches your desired level of thickness, remove it from the stove and let it cool down before passing it through a large strainer.

You Swans Are Done

Now that both the cream and the puff pastry are done, you can start the final assembly process. Start by cutting the top of the puffs a third of the way up and filling them with the cream. Next cut the tops into halves and stick them into the cream like wings. Finally set in the large S-s that we designed to be the necks and heads and you are done. You may want to sprinkle some powdered sugar on top, but that is just for decoration and it is entirely up to you if you want to use it or not. Whatever you decide though, these are going to taste and look great and they shouldn’t take more than an hour or so to make so we really hope that you will enjoy them.

Linda is an engineering PhD at the NTNU, and a great mom that loves cooking to relax after a long day at work. She shares her cooking experiences and her engineering insight into the tools she uses in the kitchen on her own website, Kitchen Expert.

10 Dinner Ideas You Can Cook Within 30 Minutes

We’ve Checked Out The Treats Truck