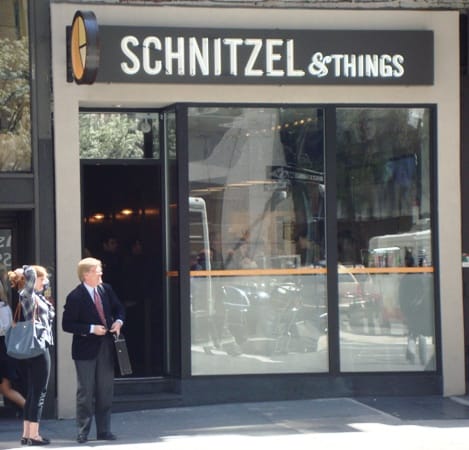 The news that Mexicue is opening a restaurant this summer was a reminder that I hadn’t yet been to the Schnitzel & Things restaurant at 723 Third Ave, between 45th & 46th St.  It’s still relatively new, having only opened about a month ago.

As I’ve said in numerous interviews, reading about and then trying the Schnitzel & Things truck in the summer of 2009 is what got me interested in street food in the first place.  It’s fair to say at this point that S&T changed my life, or at least laid out a new path that I am still happily traveling down.

It was great news about S&T opening a restaurant, even though it’s nowhere near my office for lunch.  But I gladly headed over to the new S&T restaurant for Today’s Lunch.

Everything on the truck is available here, and there are some new items as well on the main and salad/dessert menus.

Now you can get most of the schnitzels cut up into a salad with your choice of toppings.  They also have a new grilled ginger chicken dish, and some new side dishes, like sweet potato fries, which I usually love.

They also sell desserts from their fellow Vendy Award winners, the Treats Truck, and just this week have started importing Robicelli’s cupcakes from Brooklyn. 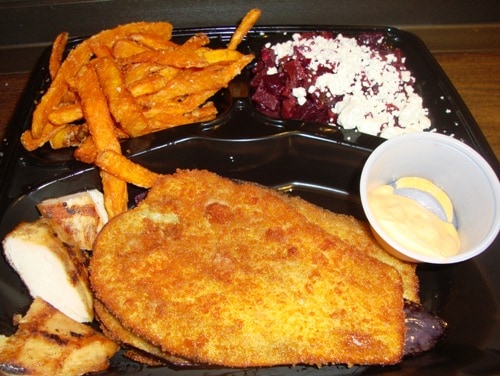 The S&T restaurant is small, with seating for 12 at 3 shared tables with 4 stools each.  This means they are also a perfect candidate for our Honorary Street Food category – a storefront with only a few seats.  There were 2 other guys at my table, and we had a nice conversation about S&T, food trucks and a few other things. 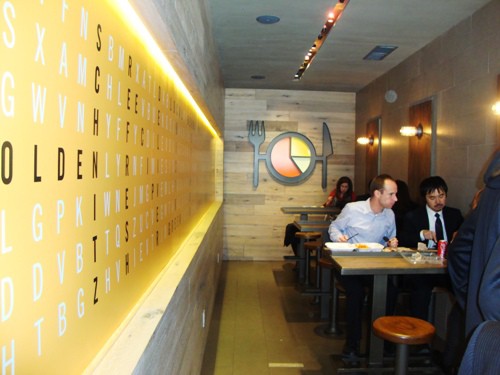 As for the food, I’ve had their chicken, pork & cod schnitzels at the truck and loved them.  I never used to like eggplant, but have taken more of a shine to it, and thought deep-fried eggplant would be good.  But I was wrong…it was great!

The deep-fried breading gave the outside some firmness and crunch, but the inside was soft as butter and melted in my mouth.  Deep-frying anything makes it good, but doesn’t necessarily make it great.  This was great.

And there were 3 large, thin slices of eggplant in the order.  At first I thought there were 2 slices, but as I was eating, it became apparent there were 3 eggplant pieces.  I also got sriracha mayo as a condiment, which was perfect with this dish, adding a little spiciness to the proceedings.

And I never liked beets in the past, but S&T’s beet & feta salad and Mexicue’s BBQ beet taco with goat cheese have gotten me over the hump.  Now I like beets, which are one of the healthiest veggies you can eat.  I guess it helps to pair it with a good cheese.  The beet salad was cool and refreshing.  I just had to be careful not to get any on my shirt, because it stains pretty good.

Today’s Lunch at the new Schnitzel & Things restaurant was excellent.  The food is just as good as on the truck, and there are a few more items to choose from, plus desserts.

I am now fully converted to liking both eggplant and beets, and Schnitzel & Things is partially responsible for that, as well as for my foray into the street food world in the first place.  Thanks Oleg, Hannah, Gene and everyone at S&T for your awesome food! 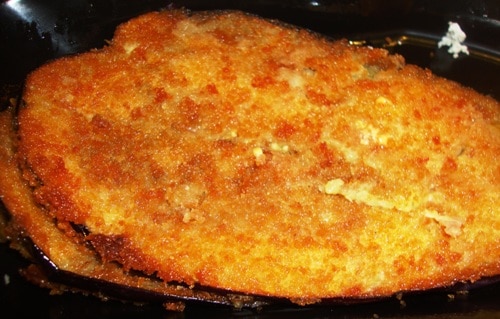 We Tasted The First German Bratwurst Pavillion in NYC