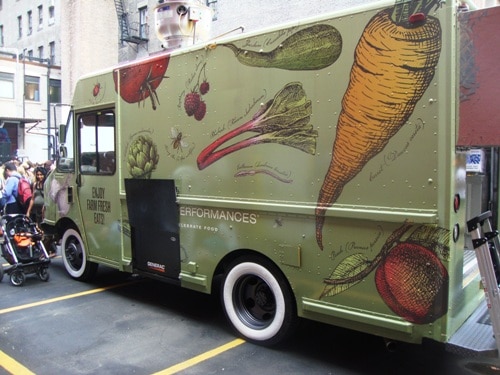 The power of Twitter rears it’s beautiful head again.  The Katchkie Truck tweeted about a new menu item that sounded pretty good, so I headed down to West Soho to give it a try.

One of the great things about Katchkie Truck is the food they serve comes from their own farm, about 2 hours north of the city.

Another advantage Katchkie Truck has is they don’t have the same parking problems as other food trucks.  The truck parks in a lot just off the street behind the City Winery.  To find the truck, go to Spring St between Varick & Hudson, and there it is.

Today’s Lunch is a duck confit quesadilla ($10 for a complete lunch) from the Katchkie Truck. 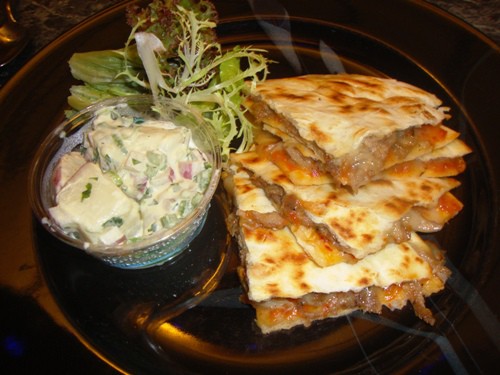 As I’ve said before, Katchkie Truck doesn’t sell food a la carte.  They have 3-4 main dishes that cost $10, but come with a side dish, a small salad and a fresh strawberry lemonade.

I’m not a trained chef, and didn’t know exactly what confit was, so I looked it up.  According to Wikipedia, confit is a generic term for various kinds of food that have been immersed in a substance for both flavor and preservation.

Confit is one of the oldest ways to preserve food.  The meat is salted and seasoned with herbs, and slowly cooked submerged in its own rendered fat, in which it is then preserved by allowing it to cool and storing it in the fat.

This duck confit was shredded and served between two tortillas with caramelized shallot chutney, tomato from Katchkie Farms and rupert cheese.  I never had rupert cheese before and asked the chef about it. He gave me a little to taste, and it was like a slightly creamier version of parmesan.  It had a strong taste that stood up well to the duck and shallot chutney, two other strong flavors.

Today’s Lunch from Katchkie Truck was excellent.  Duck confit quesadilla with rupert cheese and shallot chutney were a few new things I’ve never tried before – and together they were delicious.

Another winning lunch from Katchkie Truck, who also had one of the best pulled bbq chicken sandwiches I’ve had in a long time.  Definitely check these out if you can.

The strawberry lemonade was great too! 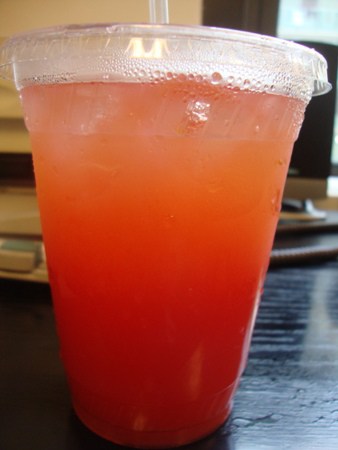