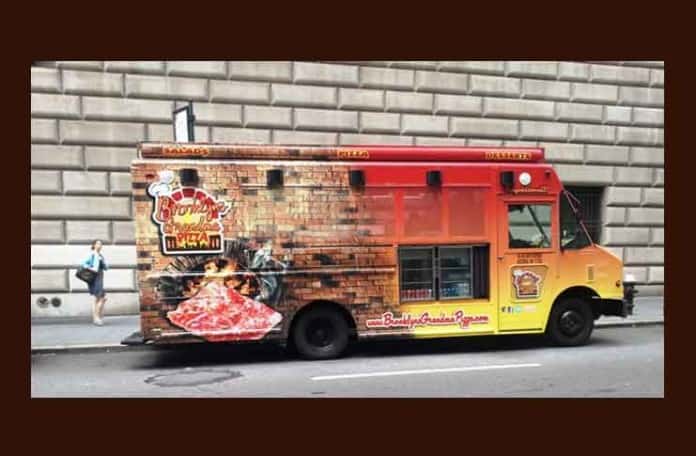 A new pizza truck arrived on the scene recently called Brooklyn’s Grandma Pizza.  You don’t see a lot of Grandma-style pizza places around, but Valducci’s and Jiannetto’s are two other local practitioners.

They had 5 or 6 different toppings to choose from on the menu, and we went for 2 complete opposites: a broccoli slice for $4 and a meat-lovers slice for $4.50.

Not having an Italian grandmother, we don’t know if there’s an “official” Grandma-style. To us it’s characterized by square slices like Sicilian, but unlike Sicilian, the crust is thin. Sauce and cheese are also usually sparser than on the traditional round NY-style pie.

The slices we received had some mozzarella and globs of tomato sauce. This pizza was not gooey and stringy like a regular, triangular slice. This was more like a baked slice of pizza.

Despite it not looking like there were a lot of toppings, we did get cheese, sauce and broccoli in nearly every bite.

The meat-lovers had sausage, pepperoni, and a little bit of ground meatball. The pepperoni had more flavor than the sausage, which was on the boring side.

The tomato sauce was decent, with a strong tomato flavor, some oregano, and a thick consistency more akin to tomato paste than tomato sauce.

The crust was nice and crispy on the outside, and softer away from the edge. The slices were about the length and width of a Sicilian slice, but not the height.

Visiting One of The Coolest Food Markets In New York