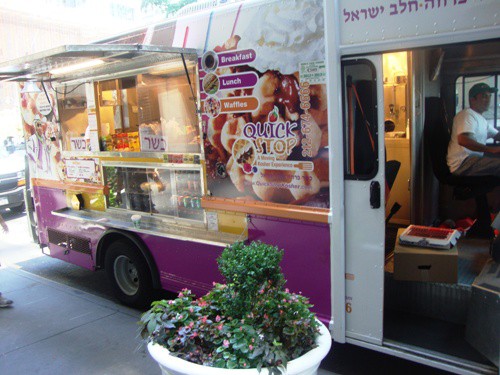 As I was heading back to the office with Today’s Lunch in my hand, a truck I had not seen before was in the process of parking on 52nd St between Park & Lex Ave.  The truck is called Quick Stop and features various kosher food items.

I spoke with Yitzhak and he told me they were a brand new truck.  He said they have falafel, french fries, various sandwiches, omelettes, bagels, panini, cheese blintzes with sour cream (an old favorite of mine)  and a caesar salad.

They also have some desserts including milkshakes, strawberry, banana or mango slushes and…waffles!  Now that’s wandering into dangerous territory!  Do I smell another waffle challenge?

If anyone tries Quick Stop, please drop us a quick note.  We would love to hear from you.