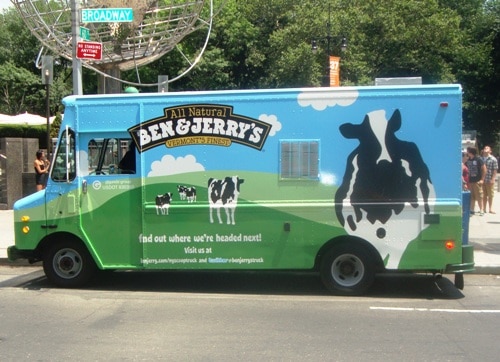 My office is near Columbus Circle, and when the Ben & Jerry’s truck tweeted they were on Broadway & 60th St, I was thrilled!  Nothing like some FREE Ben & Jerry’s after lunch.

They rotate the flavors being served, and I got a nice scoop of Stephen Colbert’s Americone Dream – vanilla ice cream with fudge-covered waffle pieces and a caramel swirl.

The truck will be at Broadway & 60th St until 5pm, so you can get some too.  If you can’t make it today, follow them on twitter here.  The Ben & Jerry’s truck is in NYC until the end of July.