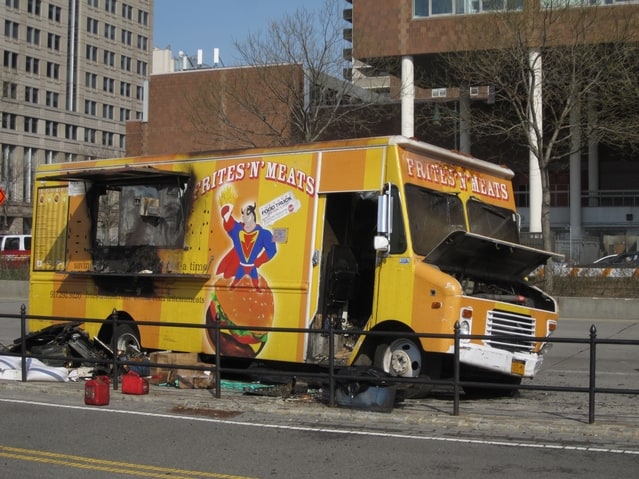 Yesterday, several people contacted me about the terrible explosion and fire on the Frites “N’ Meats truck that occurred Monday.  They did not see anything about it on New York Street Food, and wanted to make sure I was aware of it.  Thank you to everyone who contacted me.  I was very aware of it.

I first saw a tweet about it from @DNAInfo, and clicked into the link.  When I saw the horrible picture above, I got a sick feeling in the pit of my stomach, and was wondering what I could do to help.  I immediately re-tweeted DNAInfo’s tweet and wished my best to everyone at FNM.

I have gotten a little friendly in the past year with Mohammed, Ali and Hiassam, the brothers who run FNM, and was obviously quite worried.  But in situations like these, I’ve learned that if you can’t directly help, to stay out of the way.  There was no way I was going to contact them directly during this scary and hectic time.

I also immediately re-tweeted the FNM tweets that said “If anyone has any info on my brothers location or status please call me” and also later with “My brothers got burned/bruised up as they jumped out. But they will be ok. Will update; but found & in great care.”

Once I saw that everyone was ok, and looked around the web, I saw very detailed articles from DNAInfo and Eater, and less detailed articles in several other places.  I didn’t feel like I had anything new to add to the information already out there, so I decided not to just re-hash everyone else’s writing.

Now that I’ve had some time to reflect on the events, I’ve learned a couple of things.

All of my communications about this event were on twitter, which is great for immediacy, but leaves no lasting record.  When events were unfolding, I felt like getting the info out there quickly was more important than anything else.  Now I realize the tweets should have been followed up with a short article to fill in people who were not on twitter at the time.

It also would have let people know that we were involved, even if it was just tangentially.  Guess I didn’t realize how many people look to us for street food news, even when it’s not necessarily about the food.

I also learned that, even though the street food business is tough, and there is sometimes friction between vendors, when someone needs help, good people step up.

Both Mexicue and Schnitzel & Things (who had a very heated dispute with FNM last year that nearly became physical) are donating percentages of their profits to help FNM get back on their feet.  If anyone else is doing this and I missed the tweet, please let me know.

We wish to extend our best wishes to Frites ‘N’ Meats for a speedy recovery, and we look forward to seeing you on the street as soon as possible.

If there is anything we can do to help, please contact us. 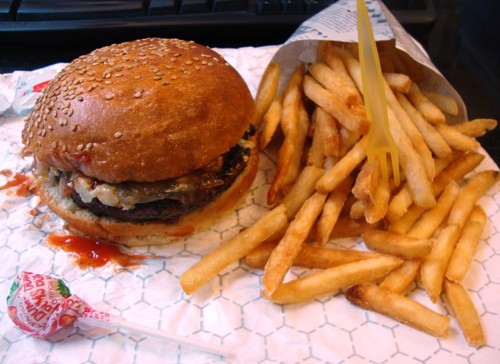