2020 has seen unprecedented food industry changes. Most restaurant owners or operators would agree the industry has suffered over the past few months. It’s all due to the pandemic and the various ways it has impacted how we all live.

Few niches haven’t had to modify how they do business, but perhaps the restaurant industry has seen the most dramatic shakeup. It’s true that there are two vaccines out now, and they are gradually finding their way to the general public, but it’s still going to be several months till everyone who wants one can get one.

It follows that it might be another year till the restaurant industry can return to some semblance of its former self. When we reach that point, we should see more dramatic and possibly permanent changes. Let’s look at some restaurant considerations for 2021.

Ghost kitchens are a concept that has become more popular since the pandemic began. They are:

Ghost kitchens have some positives, but they also have some drawbacks. On the positive side, they don’t have to employ as many individuals overall since they don’t require greeters to seat the guests, servers to bring their food, or bartenders to make drinks.

As far as drawbacks, these establishments can’t serve alcohol, and alcohol drives up the guests’ bills significantly. A restaurant will need to make up in sheer delivery volume the money they would have made from in-person dining. That’s pretty challenging.

Overall, this model seems to hurt restaurants more than it helps them. It’s a way for an eatery to stay afloat but not to thrive. We’ll have to see how long the ghost kitchen model lasts as things gradually return to normal.

2. The Public Might Still Be Reluctant to Go to Sit-Down Restaurants

Even when most people have had the vaccine, they still may feel uncertain about going to sit-down restaurants. That is because:

If someone has an immunocompromised condition, even if they get the vaccine, they still might not want to risk going out in public for quite some time. It’s likely they would rather stay at home, and they might not venture out for months after we have eradicated the pandemic.

Also, some people might not be so eager to go back to restaurants because of delivery convenience. They might weigh the pros and cons and decide that the possible fun of eating out isn’t worth it.

At home, these individuals can drink their own alcohol, which is cheaper than the typical restaurant markup. They don’t even have to get dressed, and they can eat in their pajamas. That’s one of the things people like during the pandemic, and they might not want to go back.

3. We Should See Most Restaurants Continue to Offer Delivery

Part of what has taken place in 2020 is that virtually all restaurants have had to go to a delivery model. Fast food places like McDonald’s, KFC, and Burger King now deliver. None of those ever had delivery options in the past.

Now, they have partnered with GrubHub, Door Dash, Uber Eats, etc. They have likely enjoyed this revenue stream, and it doesn’t seem likely they’ll go back to the way things were, even when there are no more state-mandated restrictions.

4. We Should See New Restaurants Open to Replace the Closed Ones

2020 has been a restaurant industry reset. Many of the most popular mom-and-pop eateries across the nation have had to close for good. 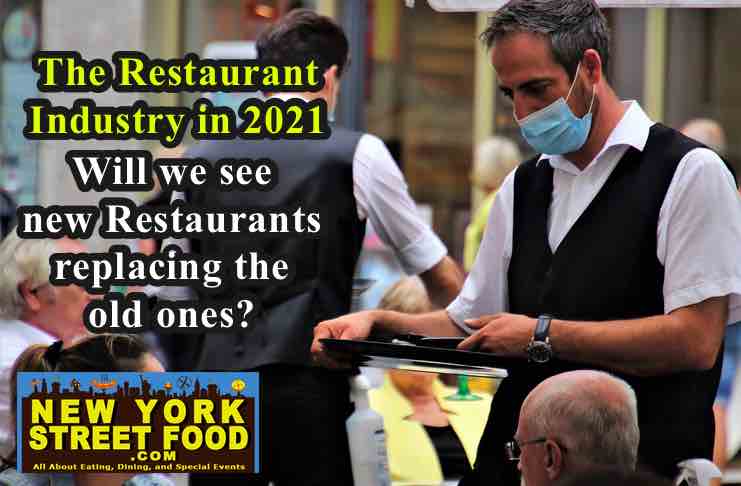 That is tragic, but there seems to have been no way to prevent it. Government loans helped a few stay in business, but many more couldn’t pay their rent, and after holding out bravely, they had to fold.

We should begin to see new restaurants open over the next couple of years as the shattered economy tries to rebuild itself. Doubtless, we will all miss the neighborhood spots we loved so much, but there will be new eateries that replace them.

There has never been a mass restaurant extinction event like that of the past year, but the one bright spot is that new establishments will open, and some of them will become our new favorites.

Want to read more of our latest posts? How about our review of Mighty Quinn’s and Ott’s Taco? or our tips on how to find great cooking advice? You can also check our guide to what Grilling Tools you’ll need to become the king of the grill or our yummy Tofu Cheesecake recipe!

How Important is Food Texture? Does it Affect Your Happiness?

Reasons Why You Might Want to Work as a Food Delivery...