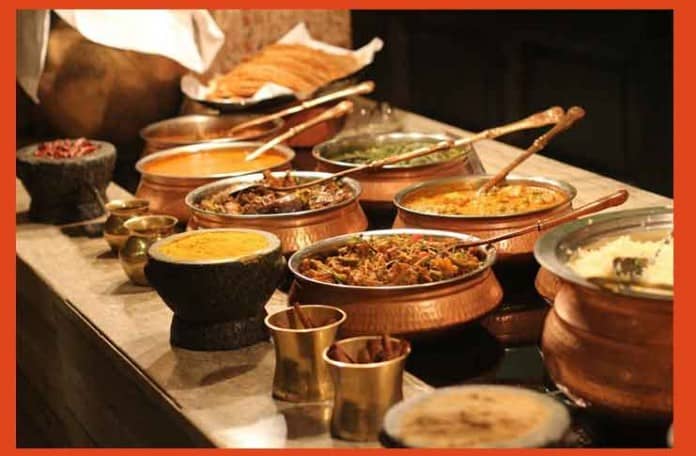 West 46th St between 5th & 6th Ave regularly has one or two food trucks parked towards the 6th Ave end.  Today Korilla is there, and I passed the Aamir cart on the way to Korilla.  It smelled so good, I changed my plans in mid-block, and I’ve had Korilla plenty of times.  Always looking for something new to try.

Even though the sign says Aamir Halal Food, the menu is much more Indian, which is where the fragrant aromas came from.  Indian food is always so aromatic.

There were a couple of things that happened on line that I want to share with you, so click through for that, as well as a review of Aamir’s chicken tikka over basmati rice. 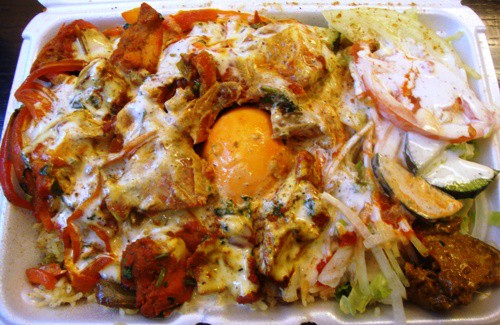 The guy in front of me ordered fish over rice, and Aamir pulled out a real nice looking salmon fillet.  I definitely want to try the salmon over rice at some point.

After I ordered, Aamir asked the 2 guys behind me on line what they wanted to order.  Both ordered 4 samosas each (?!).  I thought that was a little weird, but then a woman walked up behind them and ordered 3 samosas!  What’s going on here?  11 samosas in the space of 30 seconds.  Does Aamir put crack in the samosas?  Do these people need to go to samosa rehab?  Just askin’.

When they were making up my order, I saw a bunch of hard boiled eggs they use for the tikka and biryani dishes.  Very cool – I love hard boiled eggs.  He also asked if I like it spicy, which is a big yeah!

There was a nice amount of tender, marinated chicken tikka, and none of it was funky.  Over the chicken was white sauce, a green, herby, spicy sauce, a lot of grilled onions, and he even squirted on sriracha sauce.  Gotta love the rooster.  And in the middle of it all was my hard boiled egg. 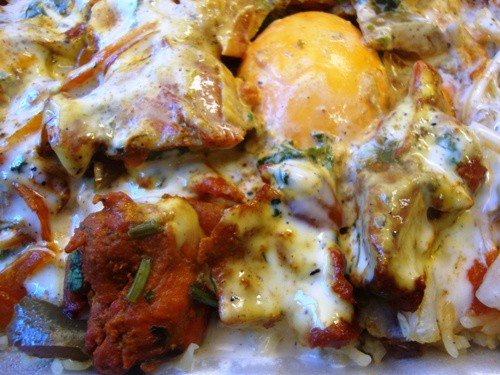 There were a lot of flavors and spices going on in there.  I wasn’t crazy about the white sauce, which was the standard mayo-based sauce – but the green sauce was nice, and quite spicy too.

Walking back to my office, the lunch was pretty heavy, and that was because there was a large amount of basmati rice.  It was seasoned and cooked well, and provided a good base and some additional flavors with the lunch – but there was no way I was going to eat all that rice.

Today’s Lunch from Aamir was pretty good.  There was a lot of food for $6, and the quality of the meat and rice was decent.  The only thing I would change is the white sauce.  If you don’t want a mayo-based white sauce, simply ask for the green and hot sauces.  It will be a spicy lunch, but you can always cool off with some lettuce, tomato and cucumber from the side salad.  They were refreshing at the end of a spicy meal.

You can see the Aamir specials menu here and the regular menu here.  I definitely want to try the fish over rice, shrimp over rice, and the chicken with sweet chili sauce – just not at the same time.