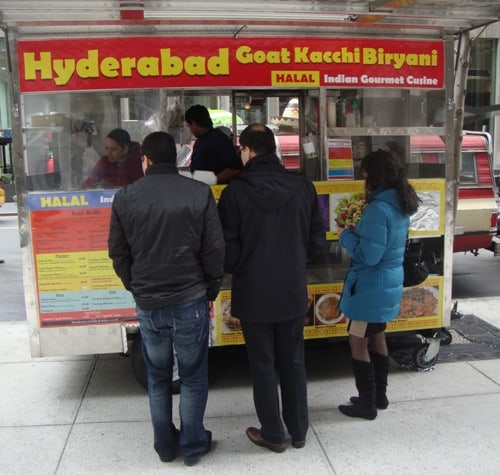 As we told you last week, a new food cart named Hyderabad popped up recently that splits its time between midtown and the Financial District.

On the sign right next to the cart’s name is Goat Kacchi Biryani, one of their specialties that we tried last week, but when we were waiting for our lunch, the woman in the cart was pouring batter onto the grill to make a dosa, and it looked great.

That’s what we ended up ordering for our second visit, a masala dosa for $6.

It’s not mentioned on the menu, but the dosas and uttapam both come with sambar as a side dish. Don’t mind if we do.

We started with the sambar, which is best described as a thick vegetable stew. There were carrots, peas, potatoes, onions, string beans, celery and a few lima beans.

The sambar was slightly spicy, but not much. We could see plenty of coriander seeds, and even a few small pieces of cinnamon stick.

The best adjectives for the sambar would be warm and hearty. It was all veggies, but had a filling, stick-to-your-ribs quality that’s great for cold days like these.

I’m not sure if we’ve talked about dosas before, so excuse me if you already know this. Thin batter that looks like pancake or crepe batter is poured on the grill, but it’s made from lentils, not eggs and flour.

After the thin pancake solidifies, various goodies are put into the middle, and it’s folded over and cut in half.

The lentil batter makes for a light and crispy housing for whatever is put into the middle. In this case it was a mix of curried mashed potatoes and peas. They also put some hot sauce on the side as a dipping sauce.

The dosa can be picked up and eaten, kind of like a very thin burrito. With the crispy outside and curried potatoes and peas in the middle, this was a tasty lunch.

By itself, the masala dosa might not have been enough food, but with sambar, it was plenty of food for lunch.

Hyderabad parks on 50th St between 6th & 7th Ave on Tuesday, Wednesday and Friday. On Monday and Thursday, they are in the Financial District, although we don’t have their exact location. We’ll update this post when we get that information.