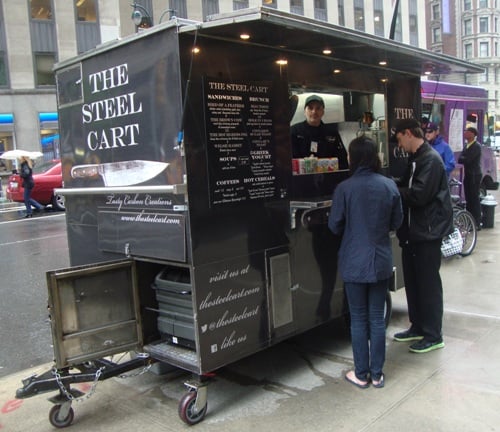 Through our Mobile Munchies twitter feed, we’ve been hearing good things about the Egg Tosti (their version of an Egg Toast) from The Steel Cart. Although we usually have only a bagel for breakfast, we do enjoy The Steel Cart’s soups and sandwiches for lunch. Once in a while it’s fun to get breakfast for lunch too (aka brunch).

The Steel Cart has been parking near our office for the past few Tuesdays, and it’s been a while since we’ve had breakfast for lunch. There are a few options on the menu, but word of mouth has been very good on the Egg Tosti, which costs $6.50. So are you up to a Egg Toast right as you wake up?

Well, it’s a bit pricey for breakfast, but a veritable bargain for lunch on Broadway & 56th St. 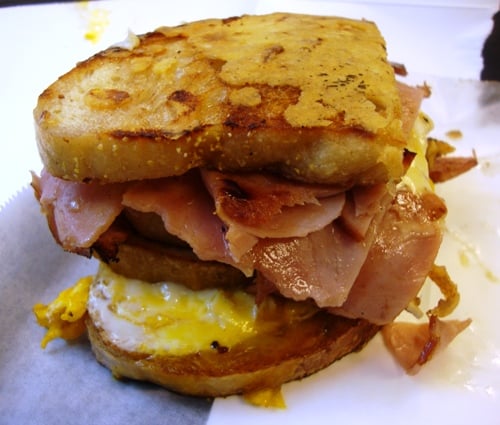 Taking the sandwich out of the box, this Egg Toast smelled awesome! You know how sometimes when you wake up on the weekend, and your significant other has cooked breakfast, and the whole place smells like eggs, cheese and ham (or bacon or sausage). That’s the olfactory experience we thoroughly enjoyed before eating this.

At first we thought the sandwich was a triple-decker (like a breakfast club sandwich), but it was actually two halves stacked on top of each other.

Taking a bite, the first thing we noticed was you could actually taste honey in the honey ham (and that’s our favorite type of ham btw).

The eggs had enough softness in the yolks to make it a little gooey, but not so much that it dripped out all over the place. Our shirt remained clean after this meal.

The bread was nicely toasted and crispy, but we couldn’t find any cheese in the tosti at first. Then we noticed the cheese was what gave the bread it’s crispiness. The cheese was actually melted and hardened on the outside of the bread.

Normally you expect American or cheddar cheese in a ham & egg sandwich, but this Egg Toast had a parmesan-type cheese melted and solidified on the outside of the bread as a coating.

The cheese wasn’t creamy like American, but parmesan gave the dish a little more of an edge. The crispy cheese tuiles were fun to eat too.

Now that The Steel Cart has its sea legs, they are making the rounds of various neighborhoods. Find them on twitter here or on our Mobile Munchies twitter feed.

At $6.50, the Egg Tosti is more than we usually spend for breakfast, but it makes a delicious, filling, well-priced lunch. 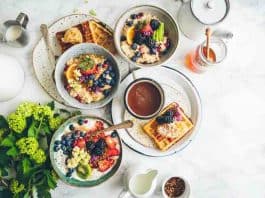 How to Improve Your Morning Breakfast Routine 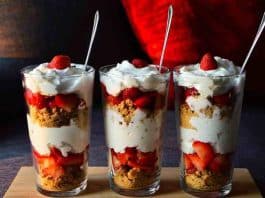 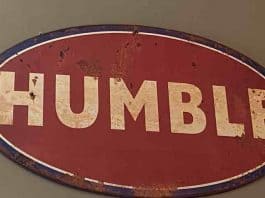