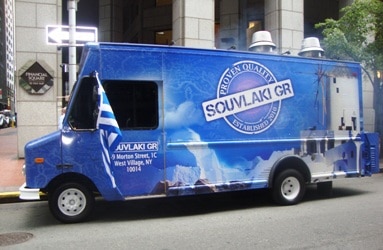 People like reading lists.  Maybe it’s the OCD part of our brains taking over, or perhaps we just like to see ourselves in the items on the list.  Whatever the reason, there are lists all over the internet, including several about our favorite subject –
FOOD TRUCKS.

The 12 Most… website had a list of The 12 Most Compelling Reasons To Love Food Trucks.  The Broward Palm Beach New Times had the Five Things We Hate About Food Truck Events, which have been booming in South Florida of late.

According to our math, that’s a plus 7 for food trucks, so click through to see which ones you agree with, which ones you don’t – and then put your own opinion in the comments.  We have put ours in parentheses.

1. Salvation from food deserts – Many people live or work in an area where there are few options for quick, yummy food. When food trucks roll in the area, they fill this need. (Not particularly applicable to New York.)

2. Change from chains – Getting food from a food truck can be a step above chains, especially in terms of freshness. Food trucks offer a change in pace from the same restaurants people usually have to choose from.  (One of the things we love about New York is that it isn’t overrun with chains, but there are still plenty of McDonalds, Chipotles, Pret A Manger, Hale & Hearty Soups, Au Bon Pains, etc.  That’s one of the reasons for the popularity of food trucks in New York.)

3. Face-to-face contact with chefs – Many food trucks are driven by the chefs who make the food, especially in cities where legislation permits cooking on board (read: all major cities except for Chicago).  People appreciate being handed their meal by the chef themselves. (Yes, we do.)

4. Introduction to new cuisines – Food trucks can often provide people with a way to venture away from foods they know and be introduced to new ingredients and dishes. Relatively low prices and “commitment” make food trucks a great place to be adventurous. Often times people don’t want to go to an exotic restaurant when they go out to eat because of the “commitment;” if they choose to be adventurous at a bricks-and-mortar restaurant and end up not liking the food, their fun night out becomes a little less fun and can be an expensive risk. With many people on tight budgets these days, the few opportunities they get to eat at restaurants are not the times they want to take culinary risks.  (We never heard of a cevap until the Cevap Truck appeared on the New York streets. Unfortunately, they are no longer around.)

5. New spin on old favorites – Whether you’re looking for a burger, tacos, or macaroni and cheese, you can tour food trucks to try variations on your long-time favorite dishes.  (Think Gorilla Cheese, Korilla BBQ, etc.)

6. Food courts on wheels – (We’re just starting to get them in New York, but they are a staple in LA and South Florida.  We need more High Lines and LIC Food Truck Lots.)

7. Meet new people – (I almost always talk to the people in front of or behind me in line while waiting.  People who go to food trucks love talking about food trucks and food in general, as we do.)

8. More convenient – (Not sure I agree with this one.  In New York, the lines can make it tough to grab a quick, convenient bite.)

9. Our day’s ma-and-pa establishments – Culturally we seem to be doing a 180 and appreciating ma-and-pa merchants as opposed to national chains. The majority of food trucks are run by local entrepreneurs, so supporting them is preferable to spending their dollars at a chain.  Not only does it make people feel good, but it is also a small investment in the local economy. (We always support the little guy in my house. The big guys don’t need our support.)

10. Be part of a community – The food truck community is a strong one.  Between the food truck owners and those who frequent them, there’s a really cool community that exists and it is easy to become a part of.  (We joined this group two years ago, and are now the acknowledged New York street food “expert”, doing interviews on the radio and with newspaper reporters here and overseas.)

11. Fresh menu items and ingredients – Ingredients tend to be very fresh and you can’t get much fresher preparation than a chef preparing your meal to order and handing it to you within seconds of plating it. (One of the biggest reasons we love food trucks.)

12. It’s cool – Let’s be honest, food trucks are still a novelty in most markets so people who go to them feel like they’re ahead of the curve and super on-trend with their dining choices. (Not sure I agree with this one either, being a jaded New Yorker.  I think it’s cool, but it’s not exactly ahead of the curve any more.) 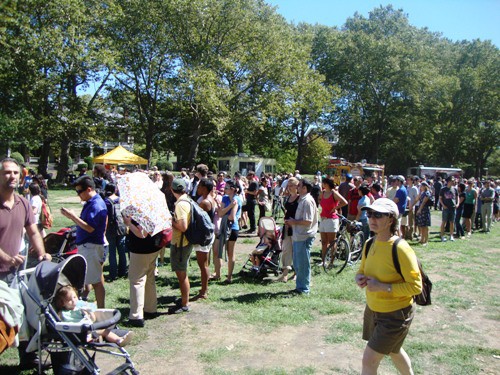 1. The heat – When it’s really hot and there’s a choice between water spritzing at outdoor bars or food trucks, the black top locale that’s a rally standard is less than seductive. Who wants to eat a hot burger standing outside when it’s 95 degrees with 100% humidity? The folks inside the trucks –where it’s infinitely hotter– are likely wondering the same thing. (Only a seasonal problem in New York, but it can be tough.)

2. Lack of seating – In theory, seats shouldn’t matter at a food truck rally, yet more food items are served overflowing with toppings to the point that both hands and napkins are necessary. Thankfully, many events are staged in a venue with a plethora of benches, while a handful of trucks offer folding tables and chairs. Yet finding a place to sit that’s not littered with trash from customers before us often presents a challenge. (Agreed.)
3. Untz music – As fun as that might be to dance with tacos in hand, since it’s seldom seen, we’re guessing most readers don’t need the side of club music that comes with a sushi handroll. It’s even more annoying when beats compete from multiple trucks. (Not really a problem we’ve seen in New York.)
2. Lines – (This is the biggest criticism we have of food truck events. Maybe with more events, the crowds and lines will be less.)
1. Critters – Bugs and rats are part of the scenery at food truck rallies; It’s just a question of whether we choose to acknowledge them. (We haven’t had the pleasure, but we’re sure they exist, hopefully coming in after the event, if at all.)

What’s your take – love ’em or hate ’em and why. Put your thoughts below.

WAS FRIDAY THE LAST DAY FOR FOOD TRUCKS AT HUDSON &...