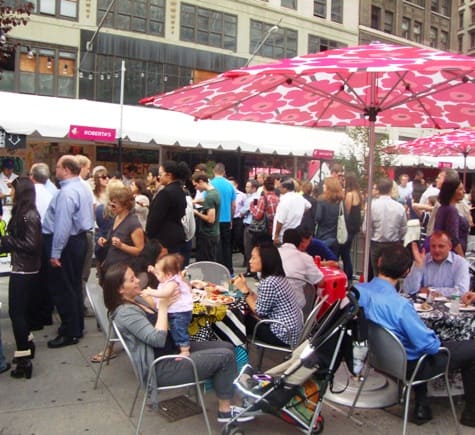 There are so many great vendors at Madison Square Eats, I went back to try the Fatty Snack stall.  It’s a veritable blip in Zak Pelaccio’s ever-expanding empire, but an easy, inexpensive way to try their food without spending  a ton on dinner at the new Fatty Cue on Carmine St.

At the Fatty Snack stall, they have a choice of two different buns, pork and vegetable. They offer a lunch special of two buns, a side dish and a drink for $9, which was Today’s Lunch.

I tried the veggie bun first, which had mushrooms, carrots, bean sprouts and cilantro.  It was tasty, with a nice mushroomy flavor.  It was a little weird having noodles in a doughy bun, but they were very thin.

NYSF readers know I’m quite the carnivore, and I definitely preferred the pork bun.  It had a light bbq taste and was spicier than I expected.  You can see there was a slice of pickle on top too.

The side dishes were a Dijon mustard potato salad or a curried black bean salad.  I chose the potato salad, which was large for a side dish, and was really good.  The mustard gave it a nice kick, and there were scallions in it too.  I didn’t expect the potato salad to be as good as the pork bun, but it was, which was a nice surprise. 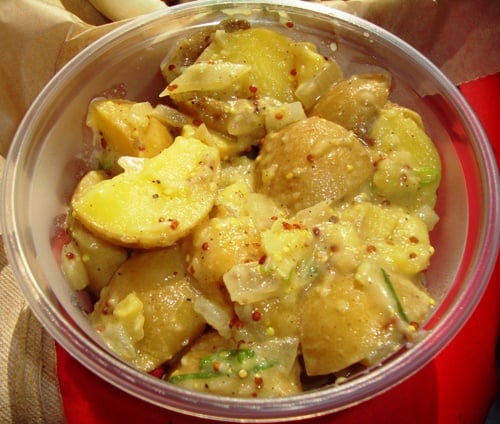 I wasn’t sure if these two pork buns would be enough for lunch, but with the potato salad, it was plenty.

Who else should I try at Madison Square Eats?  Let me know in the comments.