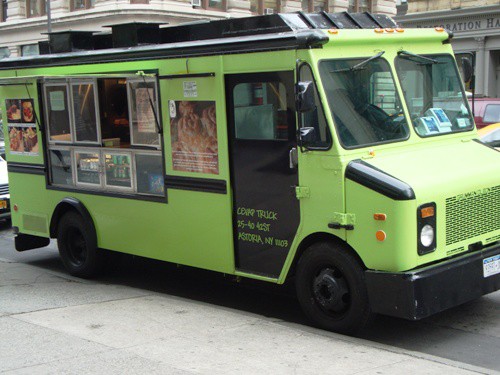 Last week after I got a Spanish Sub from the World’s Best Sandwich truck, on the way back to the subway at 23rd & Broadway, I saw a green truck on the street that I hadn’t seen before.  It said Cevap Truck and it looked pretty interesting, but I already had lunch in my hand.

I did a little research on the Cevap Truck over the weekend and saw that someone on Midtown Lunch spotted them too, but hadn’t tried it yet.

I had to be in the Flatiron District again, and was able to stop there for Today’s Lunch, which was cevapi ($5) and a cheese burek ($3).  (NYSF note: I stopped by the Cevap Truck yesterday, but didn’t have time to write this up until last night.)

I spoke to the guys for a while and got some good info, including how to pronounce cevap.  Find out more after the jump.

A cevap (pronounced “che-vop” by the guys in the truck) is a skinless sausage around the size of a breakfast sausage (cevapi is plural).  It is a Balkan dish made from 100% spiced minced beef, and is similar to kofta.  The reading I did over the weekend said the truck was Yugoslavian, but when I asked the guys in the truck where they were from, they said Bosnia. (BTW, Yugoslavia hasn’t existed for a number of years.)

They told me they had a restaurant in Astoria named Ukus, and the Cevap Truck had been in operation for less than a month.  They were on the west side of 5th Ave just below 22nd St, and said they expected to be there on a regular basis. 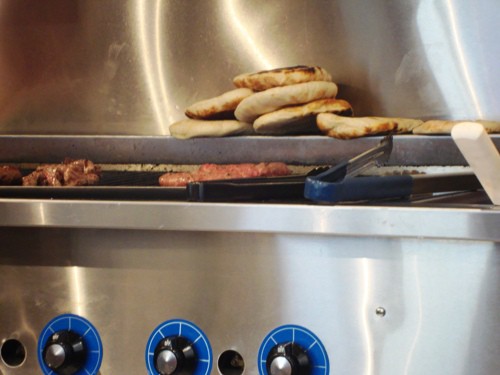 Cevapi consists of 5(!) sausages served in a soft white pita-type bread called lepinja or somun.  The cevapi were grilled on a flame, and you could see the grill marks on the meat.  As you can see from the picture above, the truck and appliances are all new and spotless.

I put the condiments on the cevapi, closed the bread back up and took a bite.  The cevapi were quite juicy and tasty.  The meat wasn’t overly spiced, but the taste came through the condiments nicely – and with 5 of them, there was plenty of meat.  The raw onions added a nice bite to the sandwich too.

The cevapi bread was lightly grilled, warm and puffy.  Even though the meat was inserted into the bread, the warm fluffiness of the bread was apparent.

The cavepi was plenty of food for lunch, but since it was my first time there, I wanted to try a burek.  Bureks are more well-known in the US than cevapi, but in case you’re not familiar with a burek, it’s a filled savory pastry.  Thin layers of dough are stuffed, then rolled and shaped into spirals like cinnamon buns.  They had 4 types of bureks: meat, spinach and cheese (zeljanica), cheese (sirnica) and potato (krompirusa).  I chose cheese.

The burek was the size of a large danish.  The crust was flaky, and the cheese inside was similar to cottage cheese.  It was pretty good, but the dough was a bit salty.  There wasn’t a lot of cheese, but the flavor of it was nice.

Today’s Lunch gets two scores.  The cevapi gets an 8.5.  The meat, bread and condiments were all excellent, and the meat was grilled, but still juicy.  It was also a very good value with 5 cevapi in the sandwich for $5.

The cheese burek gets a 7.5.  It was saltier than expected, and there could have been more filling, although it was only $3.  I would definitely try the other bureks in the future.

The Cevap Truck also has chicken and beef kebabs and hamburgers.

The Cevap Truck seemed to come out of nowhere, with no advance notice – but I have a feeling they are going to be around for a while.  The food is really good, and it’s an excellent value as well. 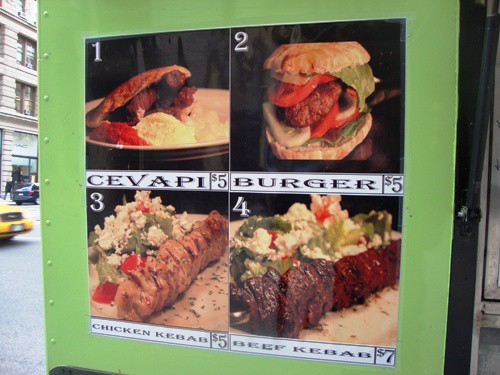