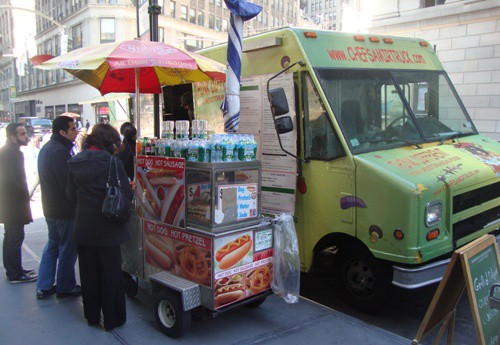 It’s tough out there on the streets of NYC!  Not only do you have to worry about the police ticketing or chasing you away, but there’s often friction with other street vendors.

As you can see in the photo above, a hot dog vendor parked his cart right in front of Comme Ci Comme Ca’s menu, just to the right of the serving window.  I guess he thought the truck was infringing on his turf.  It’s certainly not a picnic out there.

As for lunch, do you love meat?  Are you a hard-core carnivore?  Have we got a lunch for you!  Even if you’re a vegetarian, keep reading, because the Comme Ci, Comme Ça truck will satisfy you too. 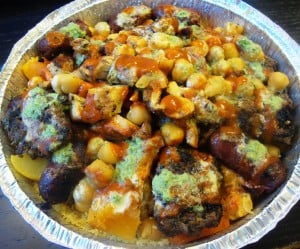 The Comme Ci, Comme Ça truck is one of the best “street meat” purveyors in the city.  They were Vendy Award Finalists in 2011 in the Rookie of the Year category, and also won the Midtown Lunch Readers Poll in 2011 for Best Street Meat.

Chef Samir is a master meat griller, and it’s all done over a flame instead of on a flattop grill.  That gives each piece of meat that delicious char-grilled flavor.  For $10, the Couscous Royale includes grilled beef and chicken,as well as real grilled lamb (not that processed gyro meat) and merguez sausage, the delicious, spicy Moroccan sausage you don’t see around much.  This dish is a meat lovers paradise!

As I alluded to earlier, the Couscous Royale also includes tons of roasted vegetables such as carrots, sweet potatoes, potatoes and zucchini.  Toss in some chick peas and put it all over either couscous or basmati rice, and you have a fantastic lunch.

You can get either Couscous Royale or Basmati Royale.  My preference is couscous.  That’s the other thing you don’t see at too many places – couscous.  Everyone has rice, but couscous is rare.  It’s light and fluffy here, and a great change of pace from rice. 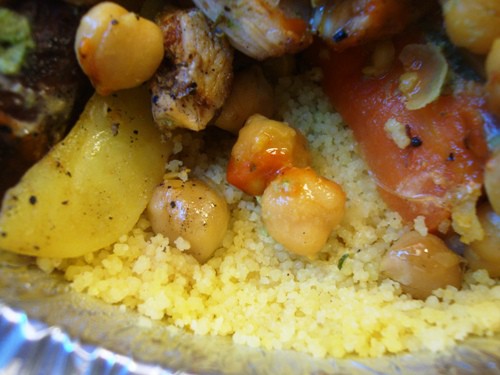 Comme Ci, Comme Ça also has 4 sauces to choose from – a white Casablanca sauce similar to what you get at other “street meat” carts, but much better here; a spicy green mint sauce, a spicy red Andalusian sauce and a green olive sauce.

You can follow the Comme Ci, Comme Ça truck on twitter here or on our Mobile Munchies twitter feed here.  They are usually parked on 36th St & Broadway on Tues, Thurs & Fri, downtown at Old Slip & Water St on Mondays, and on 52nd & Park on Wednesdays, but things have a way of changing quickly on the street, so check twitter before heading over.

By the way, Comme Ci, Comme Ça also has one of the cutest food truck designs, with a cartoon version of Chef Samir and some of his raw ingredients.