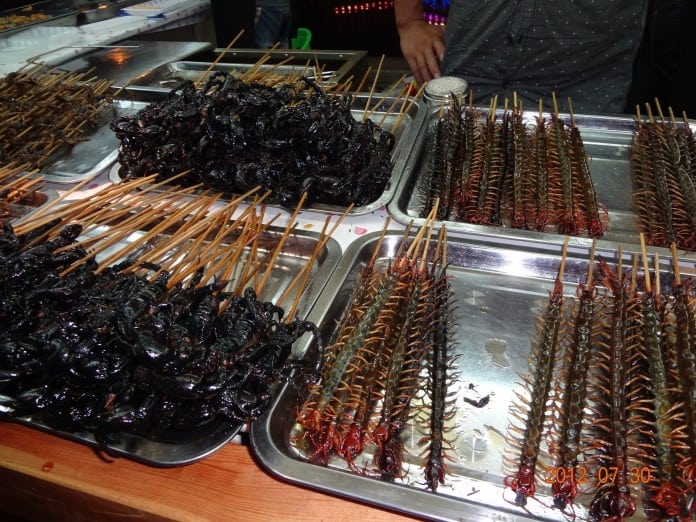 Street food is a special kind of food sold on the streets of almost every city in the world.

When you buy street foods, you are able to consume them at once, even while standing. It is the main difference between street foods and restaurant meals. It is possible to say that this ready-to-eat food is a kind of fast food though its price is lower.

Of course, one can argue about its safety and impact on our health. This food belongs to finger food; therefore, there are cases of poisoning and various diseases transmitted by dirty hands, water and products.

A vendor does not have to rent a building and open a restaurant. He is able to sell his cheap food from portable vehicles, for example, a food booth or a food cart. Moreover, a hawker can ride around the city and sell his food in different places every day.

Street food is very popular all over the world and about two billion people consume it every day. We treat street food as a common and regular phenomenon, however, very few people have ever thought about its origin and history. I will try to observe this issue in detail.

We can definitely say that street food existed in ancient Greece. The most popular meal was fried fish. Ancient Rome had its street food vendors too. I should admit that street foods were consumed by poor citizens. Very few people had an oven or a hearth in their houses. Consequently, they could not cook at home and had to purchase cheap food in the street. The most common meal of that time was soup with bread. When we speak about ancient China, we will say that it was one of the first countries, which had catering. Of course, the poor bought and consumed this food in the street. The rich could afford a servant who bought street food and carried it to their homes.

The standards of street food were not regulated until the first part of the 15th century. The first country, which legalized street food and established its standards, was Turkey. The most popular street meals of Turkey and other Eastern countries were rice, lamb kebab, fried chicken, etc. As you see, meat occupied the leading position in their cuisine.

It is interesting that street food is an international phenomenon. Street vendors sold their food in North and South America. Consequently, street food existed before the colonization of these continents. For example, Aztecs had a developed system of street food. Local vendors sold different kinds of meals. One could buy tamales, which consisted of a great number of ingredients. An average tamale could consist of poultry, maize, frogs, fruit, fish, eggs, etc. When Europeans colonized America, they introduced new ingredients and meals. However, local people continued consuming their traditional street food. It is interesting that street food was banned in New York in the first part of the 18th century. In other parts of the country, people could buy oysters, fruit, nuts, biscuits, cakes, etc. Moreover, street vendors offered coffee and different types of sweets.

Well-known French fries were invented in Paris in the 19th century. At first, French fries were a kind of French street food. Very soon, this meal became popular all over the world. British meals of that time consisted primarily of peas. A famous national Japanese ramen was a common street food in China. However, it became a national dish when Chinese immigrants introduced it in Japan.

Globalization has influenced street food seriously nowadays. Due to the cultural exchange, it is possible to find street foods of all types in every big city in the world. You can find traditional Turkish meal in New York and a common Chinese dish in Dublin. Doubtless, street food has ruined all borders and you are able to satisfy your hunger buying a kebab or German currywurst at a local street vendor.

This essay is written by one of the experts from EffectivePapers.com – a certified paper writing service.

Tasting Chicken Tinga and Other Tacos at Mexico Blvd