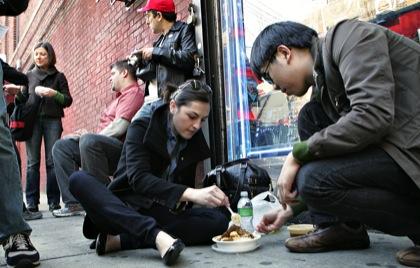 Food lovers from throughout Queens descended upon about 30 street carts on Roosevelt Avenue last month, munching on everything from pumpkin quesadillas to an Ecuadorian shrimp dish during a 2-mile walk planned by Woodside resident Jeff Orlick meant to raise people’s awareness of the tasty eats in Jackson Heights, Elmhurst and Corona.  “I really wanted people to come out and experience firsthand what’s available here,” said Orlick, the founder of the Jackson Heights Food Group, an organization that meets monthly to try different foods in one of the seemingly endless choices of restaurants in western Queens.

About 20 people participated in Orlick’s first Roosevelt Avenue food crawl.  Those embarking on the adventure began the tour armed with a map drawn by Orlick, a helpful piece of artwork that mentioned other non-food related places he believed should be checked out, including a cart full of Mexican jewelry and a bookstore.  The map also depicts the Warren Street taco carts — “the mecca of Ecuadorian food carts,” according to Orlick — and crawl participants said his map aptly described the street carts on Warren Street in Elmhurst as “proof God exists.”

Tour-goers raved about the food from many of the stands, and Flushing resident Jack Eichenbaum, who has for 25 years led his own walking tours throughout the city, bought a $3 mushroom quesadilla from a stand at 75th Street and Roosevelt Avenue in Jackson Heights.  Belen Macias, a Richmond Hill resident who works at the El Guayaquileno cart at 80th Street and Roosevelt Avenue, said she was especially pleased individuals had tried their Ecuadorian shrimp cocktail — a favorite among the stand’s customers.

“People from Ecuador living in Washington, D.C.; Connecticut; Pennsylvania, they can’t get Ecuadorian food where they live, so they’ll come here,” said Macias, who is from Quebedo, Ecuador. “They’ll ask for food to pick up and will buy things like 25 bollos to bring back to their homes.” For more information about the Jackson Heights Food Group, visit iwantmorefood.com. [YourNabe.com]