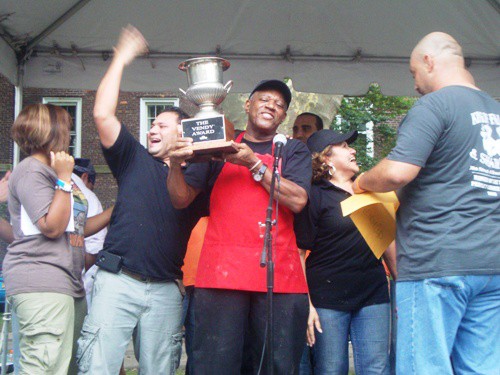 For the second time in three years, a vendor from the Red Hook Ballfields is bringing the Vendy Cup back to Brooklyn.

Rafael Soler and Reina Bermudez-Soler, who were Vendy Cup finalists in 2008 under the name Soler Dominican, brought home the award as the best street vendor in New York City for Solber Pupusas, the Salvadoran specialty of handmade corn masa patties stuffed with various meats, cheeses and vegetables.

The Solers put together beautiful plates for the judges which included pupusas, sweet plantains, tamales, pickled onions & cabbage, jalapenos and their special sauces.

The 2011 Vendy Awards, which was the 7th version of the event, had more categories and more attendees (1,700) than any past Vendy Awards event.  There’s a lot to cover, so let’s get busy.

With the exception of the Vendy Cup, each category was voted on by the people attending the event.

The People’s Taste Award was won by Souvlaki GR, who won the Rookie of the Year award last year, and moved up to the main category this year.

In addition to their excellent souvlaki, they served grilled sausages with fennel and sweet red peppers, which were delicious with fresh squeezed lemon on top.  Pavlos told me the sausages will be a permanent addition to their menu, so you can try them next time you’re at the truck or their restaurant.

The bad boys from Korilla BBQ won the Rookie of the Year award for their distinctive take on Korean tacos, with marinated meats covered by shredded Monterey Jack cheese, salsa, cilantro, and their own special sauces.  I’m partial to the K’illa sauce, which provides a nice, spicy kick to their tacos.  In true Korilla fashion, they celebrated by shotgunning a round of beer.

Wooly’s Ice, another vendor who started in 2011, won for Best Dessert.  Their ultra-thin shaved ice had the consistency of freshly fallen snow, and was topped with brownies, strawberries, and a sauce made from condensed milk, evaporated milk, and a touch of sea salt.  Very refreshing on such a humid day.

In a new category this year, The Taco Truck won the Best of New Jersey award for their corn on the cob with chili, cheese & mayo, and their tasty tacos al pastor (adobo pork and pineapple) and pescado (breaded catfish).

I nominated Paty’s Tacos for this award, and was honored when the Vendy Awards put my letter nominating Paty’s Tacos into the event program.

The last category was also a new one.  Maker’s Mark, one of the main sponsors of the 2011 Vendy Awards, created the Street Food Challenge Award for the best use of Maker’s Mark bourbon in a recipe.  Ten vendors came up with recipes using Maker’s Mark, and the winner was The Cinnamon Snail, who competed in the Best of New Jersey category, and were also Rookie of the Year finalists in 2010.

It’s pretty amusing that a strictly organic vegan vendor won the award for best use of booze in their food, but Adam is a master baker, and came up with a vanilla bourbon creme brulee donut using Maker’s Mark.  Without a doubt, they were also the Best Dressed (and goofiest) crew.

The rain held out, the food was amazing, and the 7th Annual (and my 3rd) Vendy Awards was the biggest and most ambitious one yet – and they pulled it off perfectly.  Only a year to go until the 2012 Vendy Awards!