I was near Union Square around lunch, and I haven’t been to Num Pang in quite a while.  Num Pang is a small storefront located at 21 East 12th st between University Place & 5th Ave, with a few seats at counters upstairs.  They are one of the main reasons we started an Honorary Street Food category.

For new readers who may not be familiar with Num Pang, it’s the Cambodian version of banh mi.  There are a few differences, but the quality of the food at Num Pang is usually so high, it appeals to lots of different people.

We’ve had just about everything on their menu, but still stop by when the need arises. We also want to see if anything new is on the menu.  Today we found 2 new menu items, one for veggies and one for carnivores.

There was a spicy organic tofu with a ginger-soy-honey glaze and leeks ($7 plus tax), which sounded pretty good.  But Today’s Lunch is grilled khmer sausages with Asian slaw ($7.50 plus tax), which they dub Brooklyn Bangers. 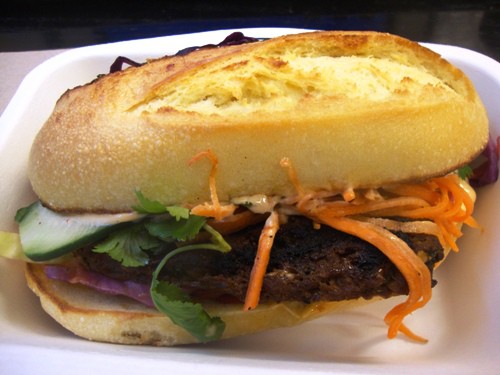 As with all Num Pang sandwiches, they start with an oval bun, spread chili mayo on the top and bottom, put on the main course, then top it with shredded carrots, fresh cilantro stalks and thin slices of cucumber.  For this sandwich, they added Asian slaw.

The sausage was flame-grilled, giving it a nice char.  The name Brooklyn Bangers was fairly accurate, as the sausages were soft like bangers, not snappy like some sausages and hot dogs.  The sausages had some herbs mixed into the meat, and they were definitely spicy by themselves, even without the chili mayo.  Just how I like things!

The carrots, cucumber and cilantro cooled things off a bit, making it a nice, well-balanced meal on the heat scale.

Once again, Num Pang comes up with a winner.  The Brooklyn Bangers were bangin’, especially with the patented Num Pang toppings.

I’m not too much of a veggie, but the spicy tofu sounded good too.  Guess I’ll be heading back to Num Pang sooner than expected. 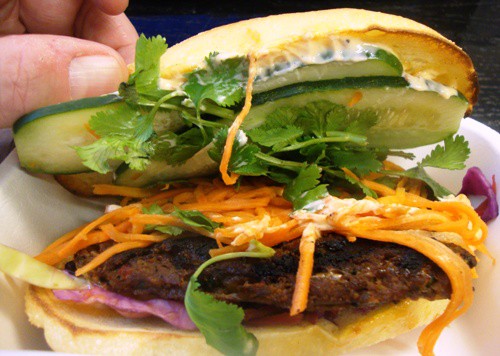 How Is This Spicy Shrimp Banh Mi?