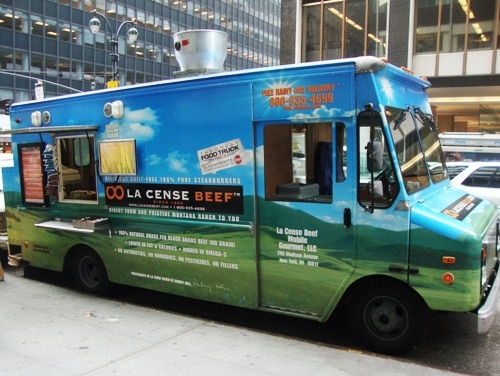 The street vendor migration continues, with the La Cense Beef (LCB) truck seeking greener pastures on 47th St between Lexington & Park Ave (closer to Lex).  This is the same block that the Steak Truck worked until they recently moved down to 24th St & Park Ave to try their luck there.

Our former downtown correspondent, FiDi Mama, reviewed the LCB burger back in July when they were on Wall St, and gave it 3 out of 4 pitas (her rating system).  She liked the flavor of the burgers, although they were pre-cooked.

I saw the burgers there waiting to be sold and wanted something fresher, so Today’s Lunch is the Philly cheese steak ($8).

I also love pastrami, so I asked for a taste of the pastrami while waiting for the cheese steak.

The taste of pastrami was pretty good – not Katz’s Deli good, but decent.  It needed more of the peppery coating, but it wasn’t too lean, which is a good thing for pastrami.  I might try the pastrami sandwich next time or the kielbasa.

According to the catalog they put in the bag, the beef is 100% natural grass-fed Angus beef with no antibiotics given to the cattle.  The LCB truck is obviously trying to sell meat from it’s Montana ranch through the catalog, which means if the truck gets people to buy mail order meat (like Omaha Steaks), it really only needs to break even.

And now for the food… 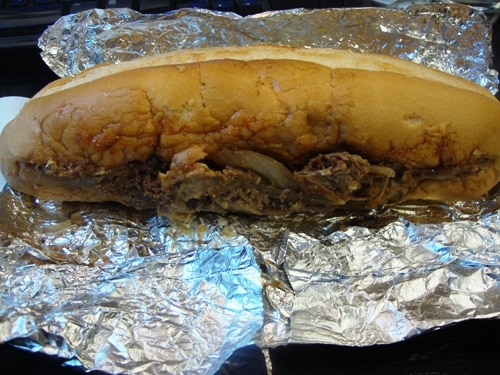 By the time I got back to the office, the bread was pretty soggy, and there was a lot of meat in the sandwich, which made eating it a little difficult at times.  The meat itself was a little dry, but the bbq sauce and hot sauce I asked for helped.

There were some blackened bits in with the meat, which is always enjoyable, but I wasn’t crazy about how the meat was cut.  It seemed to be cut the wrong way.  I’m not usually that picky, but the cut of the meat seemed a little off to me.

There were plenty of grilled onions which were pretty tasty, but I would have liked more cheese.  There was some, but this was a cheese steak, and it definitely needed more cheese.  The bbq sauce and hot sauce were good, adding a nice kick to the meat.

Today’s Lunch gets a 7 out of 10.  The soggy bread was a problem, as was the lack of cheese.  This sandwich has potential, but there are better cheese steaks around, and $8 is a little on the high side when there are other options nearby, like Magdy’s for $4 a block away.  There was a lot of meat in the sandwich, but we try to highlight quality, not quantity.

As I said above, I would like to try a pastrami sandwich or kielbasa on a roll from the LCB truck.  I’ve always liked sausages and wurst better than burgers and beef, and I would definitely like to try these for lunch in the future. 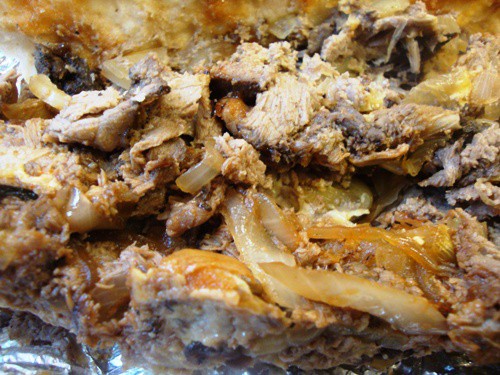 Cheesesteak With Whiz: Our Experience at Steak & Crepes