I haven’t stopped by the GO Burger truck lately, but they seem to have reappeared on twitter.  (Some of the trucks are not tweeting their locations because some local business owners are using it to find the trucks and complain to the police.)

It’s been a while, so I went to the GO Burger truck for Today’s Lunch.  While I like the burgers at GO Burger, I like the hot dogs even more.  Today’s Lunch was a Kobe Dog ($6) and sweet potato fries ($5).

I also received a few comments on The Turk (their turkey burger) from Diana, who I met at the truck while we were both waiting for lunch.  She emailed me about how she liked the Turk.

The menu said all their hot dogs come from Snake River Farms and are made with 100% American Kobe beef.

The Kobe Dog was served on a warm, toasted bun, and it was thicker than a regular hot dog, more akin to the width of a bratwurst, but not quite as thick as knockwurst.  The dog was topped with spicy German mustard and pickled jalapeños.

The hot dog had a little snap when I bit into it, and the taste inside was nice and beefy.  With the toasted bun, crisp frankfurter and spicy mustard, this was a very good hot dog.  The jalapeños didn’t seem to add much heat when I was eating lunch, but as I headed back to the office, my lips were tingling.

After eating about half the hot dog, I started on the sweet potato fries.  They were thinly sliced, and were crispy and well done.  They had exactly the right amount of salt for my taste, which means it accented the sweet potatoes, but wasn’t too salty. 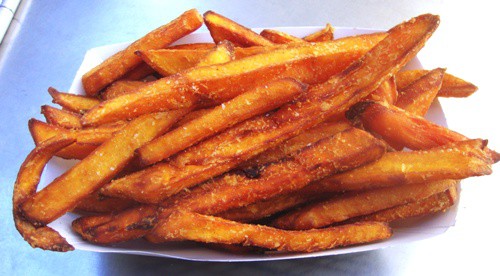 One thing I’ve had difficulty with on the street is finding crispy fries.  That was definitely not the case here.  There was virtually no extra grease or oil either.  These were among the most enjoyable and least oily fries I’ve had – sweet potato or regular.

Today’s Lunch from the GO Burger truck was really good – a nice fat hot dog, spicy mustard, pickled jalapeños and crisp sweet potato fries.  The only complaint I have is one of a historical nature.

As I mentioned earlier, I met Diana at the truck, and she was getting a turkey burger.  I asked her to send me her comments, so here they are:

“My review on the Turkey Burger is that it’s great! I would get it without the pickles next time, as the herbs in the turkey burger didn’t seem to mix well with the pickle. Many time turkey burgers are dry and just a disappointment, but this was not! I would definitely get it again, sans pickles!”

Thank you Diana for your thoughts on The Turk, which costs $6.  It is tough to find a good turkey burger – and this sounds like a winner.