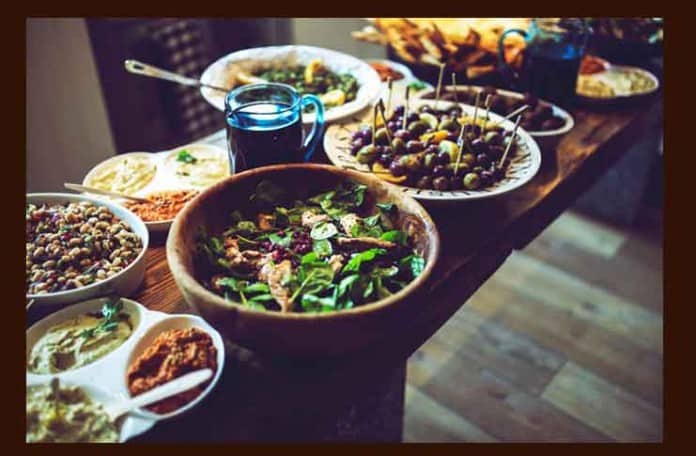 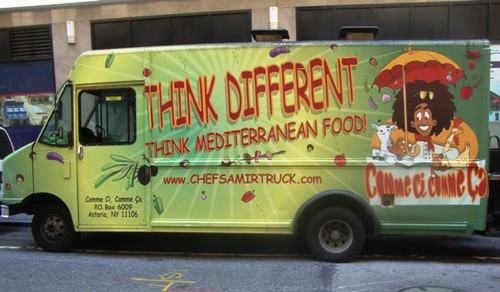 After having street food for lunch every day for nearly the past two years, I’ve had most of the regular menu items from the better vendors.  That means when I see a special that looks appealing, I want to try it.

That was certainly the case when I saw the Bademjan Wrap ($6) from the Comme Ci Comme Ca truck, which I got for Today’s Lunch. 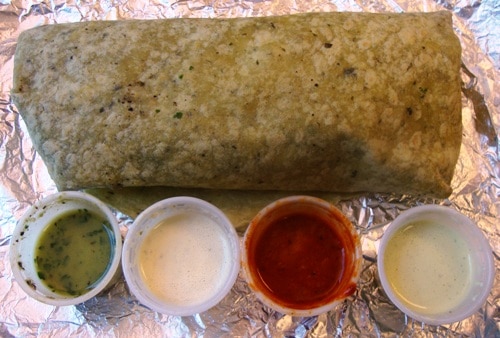 The bademjan wrap is your choice of a multi-grain or spinach wrap with these ingredients inside: hummus, babaganoush, greens, tomato salad and green olives.

Chef Samir is such a great griller of meat (for example, his Basmati Royale) that it seemed a little weird getting a vegetarian dish for lunch, but when the weather’s hot, a lot of meat or a big heavy lunch can be like a rock in your stomach during the afternoon.

The bademjan wrap is light and summery, perfect for this time of year. The hummus and babaganoush have enough heft to keep you satisfied until dinner, but it’s not like a heavy, tough to digest meal.

I didn’t really like olives in the past, but I’m starting to come around, and the green olives in this wrap were very tasty.  The hummus was creamy, and the babaganoush added some eggplant to the mix. 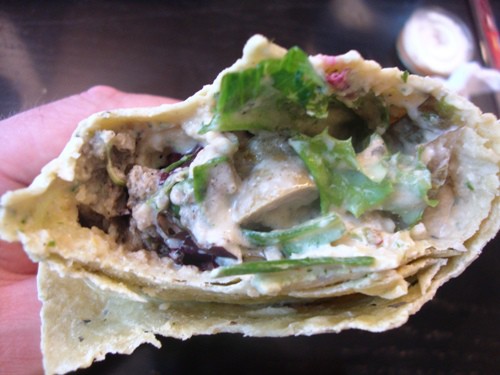 I kept putting the different sauces on and tried bites with each.  Here are my thought on the sauces:

Casablanca sauce – in the same family as the white sauces served at most of the halal carts, but significantly better.  It was garlicky with a little lemon and almost tended more towards an aioli than a white sauce.

Spicy Andalusian sauce – red, tomato based sauce that was the thickest and spiciest of the sauces.  It was a little too strong for the bademjan wrap, but would be great for meats such as beef or lamb.

Green olive sauce – creamy and a little spicy, but not as hot as the Andalusian sauce.  Some olive flavor, but not too strong.

I’m a carnivore and don’t usually order vegetarian dishes if given a choice, but this was an excellent lunch that I expect will keep me filled up until dinner.

I already knew Chef Samir and the Comme Ci Comme Ca truck had great grilled meat, but now I know their vegetarian bademjan wrap with hummus, babaganoush, olives and more is delicious too!