Home Food Trucks Did We Like The Wasabi Roll at Urban Lobster Shack ?

Feel like Wasabi Roll? We haven’t seen much of the Urban Lobster Shack…On Wheels on twitter lately, but they’ve been around. We asked why they haven’t been tweeting, and were quite surprised by the answer, which we’ll tell you later. Kind of hard to believe.

On Monday nights, the truck is parked across 58th street from the Columbus Circle subway entrance just east of 8th Ave.

The menu is much more extensive than at the other lobster roll trucks, Luke’s and Red Hook. There were about a dozen options to choose from, including their new creation, the Lobzel, a lobster roll served on a pretzel bun.

But the lobzel was $16, two bucks more than most of the other lobster rolls, and they said it was significantly larger than a regular lobster roll.

We were on our way home for dinner, so a giant lobster roll wasn’t a smart move. Instead we went for a Wasabi Roll for $14. 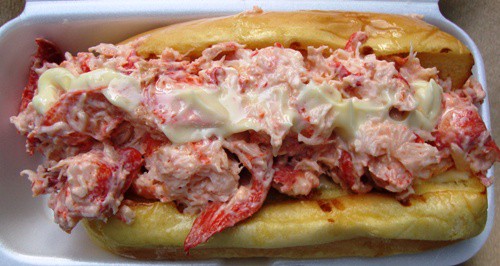 Taking the Wasabi Roll out of the container, this baby was jam-packed with lobster meat. It wasn’t easy taking a bite, but we managed 🙂

The lobster meat was mixed with a decent amount of mayo, so that the flavor of mayo was pretty evident in each bite. That made it nice and creamy, but this wasn’t one of those lobster rolls with lots of mayo and no lobster meat. There was plenty of lobster meat in there.

Even though we saw a streak of wasabi cream on the roll, it wasn’t very strong. There was a minimal wasabi taste, but we would have definitely liked more.  Maybe the jalapeño or sriracha rolls would have had more of a kick.

The other flavor that came through clearly was melted butter from the top-sliced roll. It was plentiful (and delicious).

So, this was a good lobster roll with plenty of butter, mayo and lobster meat. What it needed more of was wasabi.

The Urban Lobster Shack makes the rounds of various neighborhoods, but they are pretty quiet on twitter. The guy in the truck told us they don’t tweet because the other lobster trucks steal their parking spot.

We have 2 comments on that. First, we doubt the Red Hook Lobster Truck or Luke’s Lobster Truck are prowling twitter waiting for these guys to tweet their location…and then steal it.  Second, if you tweet your location after parking, nobody can steal your spot.

They have asked people to DM them to get their current location, but that only works if the truck is following you as well.

The food is good at Urban Lobster shack…On Wheels, but the owner is a little loopy. You can see their menu here.

BISTRO TRUCK IS THE DAILY DEAL ON GROUPON