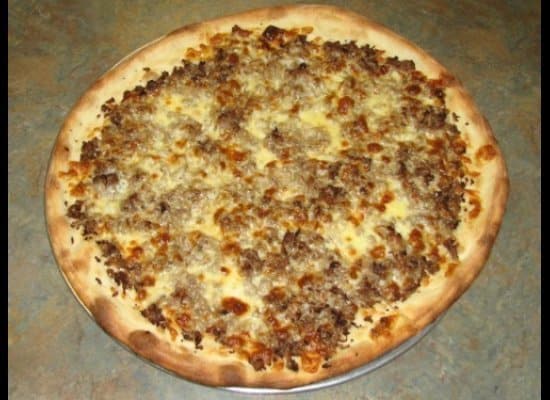 In May 2011, we ran across a new food truck called Valducci’s Original Pizza.  The people behind Valducci’s had a pizzeria in Staten Island for 22 years, but the truck had only been around for a few days at that point.

Now Valducci’s has been around for almost a year, and we recently stopped by one of their regular spots on the west side of Park Ave at 52nd St. They also hit a couple of other neighborhoods, and some of the new food truck lots.

Valducci’s serves Sicilian-style pizza with various toppings.  We went for a slice with fresh ricotta cheese and a slice with fried eggplant on top.  Each cost $4 and was about 8″ long.

Valducci’s Pizza is not the type of pizza you get at most corner pizzerias.  There’s a lot of sauce, a nice sprinkling of parmesan, and no mozzarella.

If you don’t like a lot of tomato sauce, this is not the pizza for you.  I like tomato sauce, especially a sweet tomato sauce, and Valducci’s sauce is definitely of the sweet variety.  You won’t run across chunks of tomato, but you will get a sweet, tomato-ey sauce.

With mostly sauce and a little parmesan on top, the toppings take on more importance than on a standard slice.  Two thin slices of fried eggplant were a good topping.  The eggplant was soft and easy to bite without it coming off the pizza.  Eggplant always goes well with tomato sauce.

The second slice had a couple of thick lines of fresh ricotta cheese.  The fresh ricotta was creamier than store-bought ricotta, although I would have liked another line of it on the slice.  It was still a tasty piece of pizza.

I almost forgot to talk about the dough.  It was crispy on the bottom and soft under the toppings, with an edge of crunchy crust on the side.  The crust did not get soggy on the bottom, and it held up well throughout lunch.

Valducci’s Original Pizza is usually on Park Ave & 52nd St a couple of days a week and at the food truck courts on other days.  you can check on twitter here or on 0ur Mobile Munchies twitter feed.

Several people behind me ordered the vodka pizza, which had a pink, creamy sauce, but you can see the full menu here and decide for yourself.