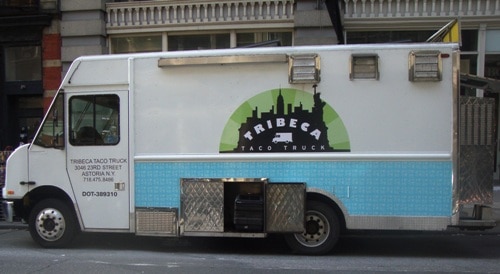 I’ve never had a quesadilla from there, so it was simply question of which filling to get inside and which sauce to get on top.  Percy the chef and co-owner suggested a Tribeca quesadilla, which was $6.  I decided to top it with spicy mango sauce. 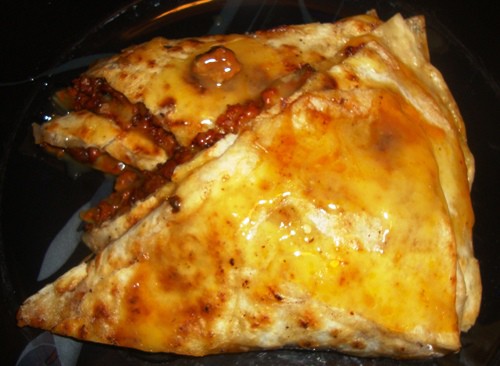 The Tribeca quesadilla is for meat lovers, with both carne enchilada (spicy pork) and chorizo.

Quesadillas are often quite thin, with mostly cheese and a little meat, but this quesadilla was packed with meat. After cutting the quesadilla into quarters and stacking them up, it was several inches thick.

Did I mention the meat was tasty too?  I love chorizo, but it can sometimes be fatty.  This chorizo wasn’t fatty, and the pieces of spicy pork had a real nice flavor too.

Two types of cheese were melted inside with the meats – monterey jack and cheddar.  The jack was mild and creamy, while the cheddar added a little edge.

What really put this dish over the top was the spicy mango sauce.  Tribeca Taco Truck has excellent sauces, and spicy mango is one of my favorites.  It’s spicy and fruity at the same time, and it goes great with most meats. 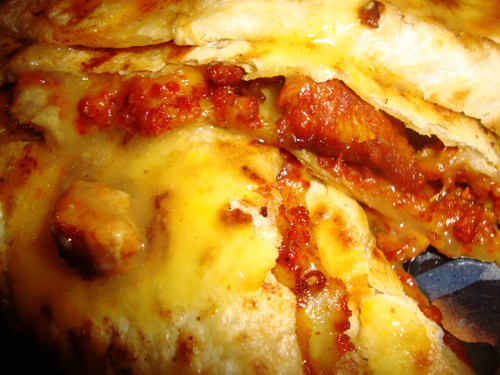 You can follow the Tribeca Taco Truck on twitter here or on our Mobile Munchies twitter feed, but they don’t tweet too often.  However, their new truck is parked on Greene St in Soho just north of Spring St during the week, and on Broadway by Spring St on Saturdays.

They also have another truck that will be going to different neighborhoods downtown, including around NYU.  They’re going to have to tweet more often for the truck that moves around.  Hear me guys?