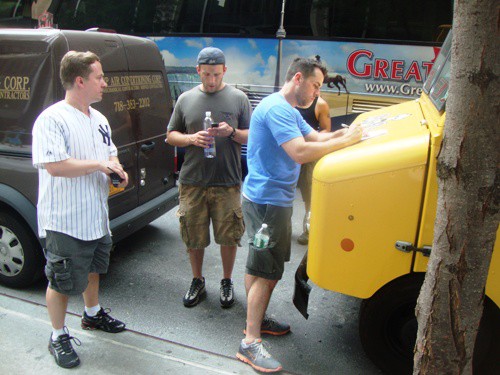 I was over checking out the scene around Rock Center, where there has been a significant police crackdown on food trucks on 51st & 52nd St.  Well, it looks like the crackdown has moved down to 50th St between 6th & 7th Ave.

Around 1:15, Big D’s Grub Truck had a line of about 15 people, with another half dozen waiting for their orders.  Three (!) plainclothes policemen wrote Big D a ticket for “vending from a metered spot”, a law that was recently upheld by a judge in the Paty’s Taco Truck case.  They also forced Big D to close down for the day.

I spoke to one of the cops, and he explained that food trucks are not allowed to vend from metered spots.  Metered spots are to give cars and trucks places to park.  Nobody is supposed to park at a meter and feed it (excuse the pun) all day.  He was nice about it, and understood that people love the food trucks, but this will have to be solved through changing the law, not by trying to keep one step ahead of it.

I also spoke with Grant from Sweetery NYC today about the same type of crackdown on Hudson St.  Things are still hot there, but have cooled down a bit because the trucks have spread out.

Jalapeno NYC moved up a block above Houston St, and Bistro Truck, Korilla and Gorilla Cheese have moved south and east, down towards Dominick St and over 1 avenue to Varick St.

But these are only temporary solutions.  Until the law is changed, food truck vendors will be at the mercy of the police, and will keep getting tickets.

As I’ve said before, this is where the NYC Food Truck Association needs to step in and act as an advocate for food truck vendors, and try to broker a peace among police, building owners, food business owners, and the city.  Lots of moving parts in this machine.