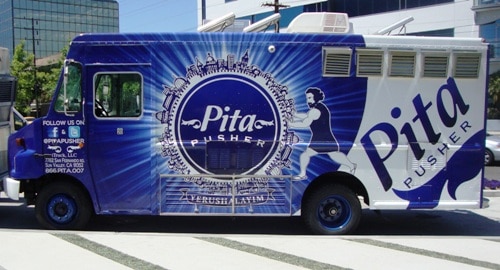 For my last lunch in L.A., I had a choice between two trucks with punny names – either Middle Eastern food from the Pita Pusher or sliders from the Patty Wagon.

I started the week with sliders from Baby’s Badass Burgers, and decided against a slider from Rosa’s Bella Cucina in favor of a regular sized sandwich.  What is this obsession in L.A. with sliders?  Is that how the people here stay fit? 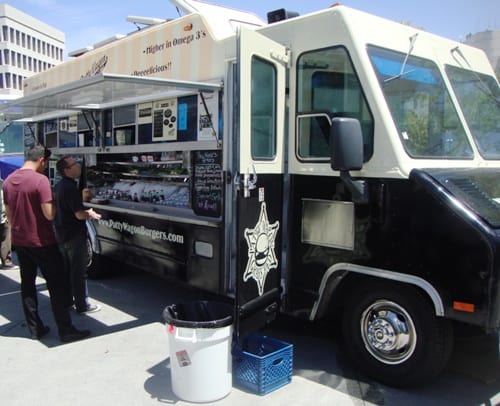 Even though Patty Wagon looked really good and had a longer line, I needed a break from burgers.  I decided to get a chicken shawarma sandwich from the Pita Pusher – but changed my order at the last minute.

One of the things I enjoy about food trucks is seeing what people in front of me get.  Just before I ordered, a woman picked up a Greek salad ($7) with chicken shawarma meat ($3 extra) that looked excellent.  That’s when I changed my mind and ordered the same thing – but mine turned out a little different from the lunch the woman picked up.

While everything coming out of the window looked good, the wait was longer than it should have been.  I probably waited from 10-15 minutes after ordering, and it was busy, but not busy enough for that kind of wait. 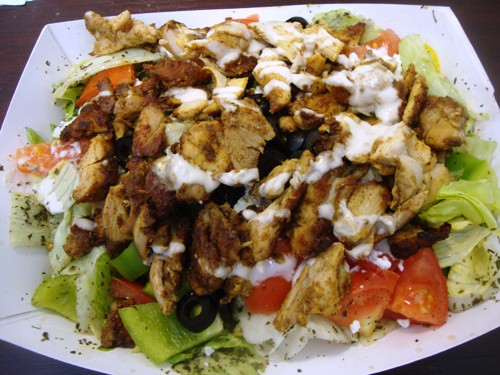 When lunch came out, it was pretty heavy to carry back to the office.  There was certainly a substantial amount of food wrapped up, which should have been expected for $10.

After I unwrapped lunch, it looked great – but the triangles of pita bread were missing.  What caught my attention in the woman’s order (which wasn’t wrapped up) were pita triangles that surrounded the salad like a pointy fence.  They obviously forgot the pita when wrapping up my lunch – and forgetting the pita from a truck called the Pita Pusher is not a good thing.

The salad still looked really good, and I dug in.  The large amount of chicken was lightly breaded and spiced, and they put tahini sauce on the chicken, which is something I wish more vendors offered.

The King of Falafel & Shawarma offered tahini sauce on the lunch I had there a couple of weeks ago, but most New York street food vendors serve a mayo-based white sauce.  I’m a big sesame fan, so tahini sauce is definitely my preference.

Under the chicken was a big Greek salad with everything you would expect – lettuce, tomato, cucumbers, bell peppers, black olives and feta cheese.  It also had a good amount of herbs like oregano and thyme, and had an oil & vinegar dressing.  All the salad ingredients were fresh and crisp.

At a certain point everything got mixed around a bit, and towards the end of lunch, the chicken with tahini and oil & vinegar was really tasty.

Overall, the food at Pita Pusher was very good, but they need to pick up the pace on filling lunch orders – and not forget to include pita bread with every order. 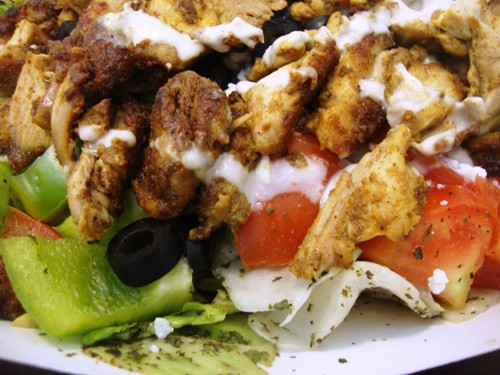