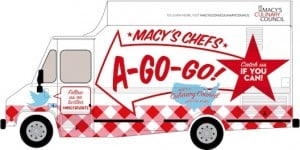 Now the MCC will be bringing their expertise to 9 cities nationwideas part of Macy’s Chefs A Go-Go.  Rolling into cities nationwide, Macy’s first-ever food truck tour cooking his or her favorite summertime recipes and dishing them out for free!  Click through for the cities and dates the truck will be visiting.

Some notable stops include an appearance at Macy’s 4th of July Fireworks festivities in New York City, a visit to Boston’s Prudential Center, an outing to the Portland Saturday Market and a stop at Washington, D.C.’s Eastern Market.

If delicious free food and celebrity chefs weren’t enough to get you to visit the food truck tour when it rolls into your town, fans that “Like” Macy’s on Facebook (www.facebook/macys), or follow Macy’s on Twitter (@macyevents),will receive a special gift at each food truck stop, while supplies last.

Fans can also join the chefs on Twitter as they tweet live from the food truck by using the hashtag #macyschefs. While the chef’s dishes are free, guests can support a good cause by donating to Feeding America, the nation’s largest domestic hunger relief organization. For every $1 donated, Feeding America can help provide seven meals to those in need on behalf of local food banks.