Home Business, Legal & Police Issues IS NEW YORK IN THE MIDST OF A FOOD TRUCK SHAKEOUT? 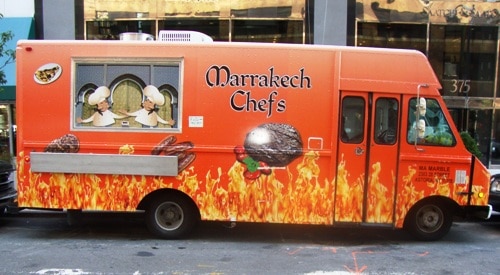 See below for Update

Are we in the midst of the first New York food truck shakeout?

There are a bunch of food trucks that we have not seen on the streets lately, and we have not gotten responses from these vendors to our queries. Who are we talking about, and what are the reasons for them no longer being around?  Click through to find out.

Some vendors are not tweeting because the police and local businesses have used the tweets to find them and file complaints, forcing them to move.  We know who you are though, because these vendors usually tweet to tell people to check their websites for locations, or say they are at their “usual Wednesday spot”, for example.  We’re not talking about those vendors.

On first blush, we’re talking about Marrakech Chefs, , The Cevap Truck, Village Pourhouse, Jianetto’s (midtown) and Urban Oasis.  There may very well be different reasons for these trucks no longer being around, and it’s also possible one or two are just taking some time off – but the fact that they are not on the street and are not responding to our inquiries makes us believe they are no longer in the NYC food truck business.

With the huge popularity of food trucks in 2009 and 2010, it was inevitable there would be lots of people trying to “ride the wave” this year in starting a food truck, some with the eventual goal of opening a restaurant.  Many of these vendors found out it’s not as easy as it looks (and it doesn’t look easy, if you do any research or digging).

Obviously, the police crackdown on food trucks in midtown and other areas was a big factor.  When there used to be one or two food trucks in an area in 2010, suddenly there were 4 or 5 within a 2 block area.  Things came to a head on Hudson St around Memorial Day, forcing some of the trucks to move up, down or over a few blocks, and others to fight with each other for the few available spaces.

In some cases, a questionable business plan might be the culprit.  The Urban Oasis Truck was selling $7-9 smoothies with “health food” ingredients such as coconut meat, whey protein, flaxseed, spirulina (?), protein powder and the like.  These were high quality smoothies, but it’s not what New Yorkers have for lunch. (L.A. on the other hand…). In fact, last week Urban Oasis tweeted about having a food truck for .

In other cases, the food quality was below what New Yorkers expect for lunch.  I didn’t get to try Marrakech Chefs, but from what I heard, it was not good at all.  They basically ripped off Bistro Truck’s menu, and dropped the food quality down a few notches in the process.

With Jalapeno NYC, some of the food was decent and some was less so, but what turned me off was the service, which was usually short and curt.  The best vendors (and restauranteurs) know it’s as much about the experience as the food.

It’s the 2nd tier of vendors that are closing, and there will likely be more closing over the winter.  This should give pause to everyone who wants to open a food truck.  It’s not as easy as it seems.  The hours are long, the margins are thin, it’s not easy to find good staff, and you need a great concept and execution to be successful.  You are hereby warned – only the best need apply!

UPDATE – The Jalapeno NYC truck was there today after I posted the article, but we still stand by the comment about their curt service.  We have confirmed the Marrakech Chefs truck is no more, and word is it has been converted to a Rocco DeSpirito truck.  Some people may not see that as an improvement, but we’ll reserve judgment until we try it.

Reasons Why You Should Consider Outsourcing Janitorial Services For Your Restaurant