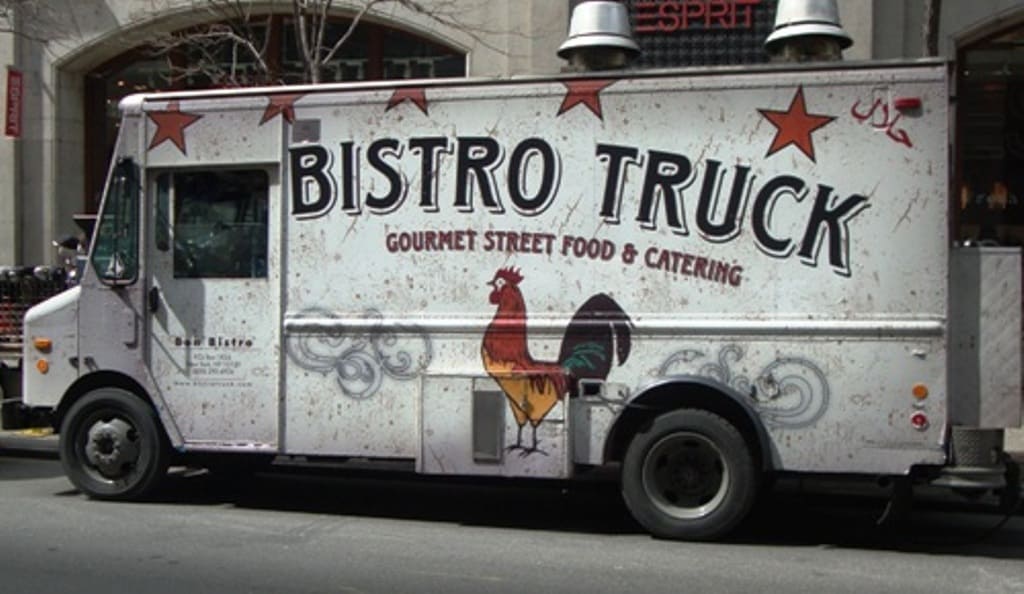 Last year in March, we told you about food trucks re-emerging after a brutal winter.  While this winter was much milder, a number of food trucks still took off a few months for the winter.

Some vendors like Bian Dang and Palenque are already back on the street.  Click through to find out when some other food trucks will be coming back.

Bistro Truck ‏ – Even though Yassir is very busy preparing to open a new restaurant on April 20th, he insists the truck will be back on the street Monday, April 2nd with some new menu items. That would be a miracle less than 3 weeks before opening a new restaurant, but after eating Yassir’s food, I believe in miracles.
The Cinnamon Snail  – Yesterday we told you about The Cinnamon Snail returning on Monday, March 26th, as well as the two new dishes Adam will be serving.  Can’t wait!
Kelvin Natural Slush – Kelvin tells us they will be back out in April.  We’re hoping for Monday, April 2nd, but the exact date is not yet confirmed.  The big news with Kelvin is the “Ice Cube” stand they are building on the corner of Bleecker St & 6th Ave under their permit from the NYC Parks Dept.   While the original hybrid power system plans did not turn out to be feasible, the Kelvin Slush stand is moving forward, and should be on location this spring.
Eddie’s Pizza NY  – Even though Eddie’s Pizza Truck was out all winter, they did park their pizza cart indoors for the winter.  Eddie’s Pizza Cart re-opened yesterday on 66th St & Broadway by Lincoln Center.
Feed Your Hole  – We heard from Sean Sullivan that he expects to be back on the street next week, and is looking for someone to work outside the truck taking orders.  FYI, Feed Your Hole wasn’t taking the winter off.  They had serious mechanical problems and basically rebuilt the truck under the hood.  I hope they have a good mechanic.
Andy’s Italian Ices – Andy’s Italian Ices didn’t hit the street until late in the season last year, but we did try them once.  Andy told us there are major revisions including a Lavazza espresso bar, flavored teas and hot chocolate, and new Italian Ice flavors such as pomegranate lemonade, fresh peach, ice tea, and for those looking for an energy boost – Red Bull (!).  Andy told us he will be on the street April 1st, but that’s a Sunday, so we’re guessing he means Monday, April 2nd.
Unknown Re-Opening Dates
Wooly’s Ice ‏ – We haven’t heard from last year’s Vendy Award Winner for Best Dessert, but with the weather warming up quickly, we’ll let you know as soon as we hear from them.
Katchkie Truck ‏– One of the big surprises last year was the Katchkie Truck, which was affiliated with a farm upstate.  They had one of the best pulled bbq chcken sandwiches we’ve had, as well as duck confit quesadillas and more.
The Jalapeno – They tweeted “end March or early April”, so it should be soon.
If we missed anyone, or you would like to clarify something, please email perry@newyorkstreetfood.com with the details.  Should be a great spring/summer/fall for New York street food.