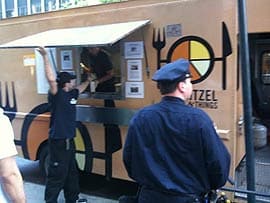 A few hours ago, the Schnitzel & Things truck was asked to move from 54th St & Lexington Ave by the cops.  The reason, according to this tweet from the S&T truck: “Dear all, we’ve been kicked out by cops because of complaints from citicorp. The reason they gave = “we are a terrorist threat”. Lol WTF????”

Gothamist spoke to Schnitzel & Things’ Gene Voss who said that when the police first told him to move the truck, he showed that he was legally parked and permitted. The police also looked at his and his employees vending permits. The police left but returned saying that since the Citigroup Building is such a high-profile building (and possible terrorist target), that Citigroup could make a complaint citing a terrorist threat and cops were essentially empowered to make him leave.

When asked if he’s been forced to move from other spots, Voss said that when he was parked outside the News Corp. building at 6th Avenue and 48th Street, News Corp. apparently complained to cops—but in that instance, the cops said he was allowed to stay. [Gothamist]