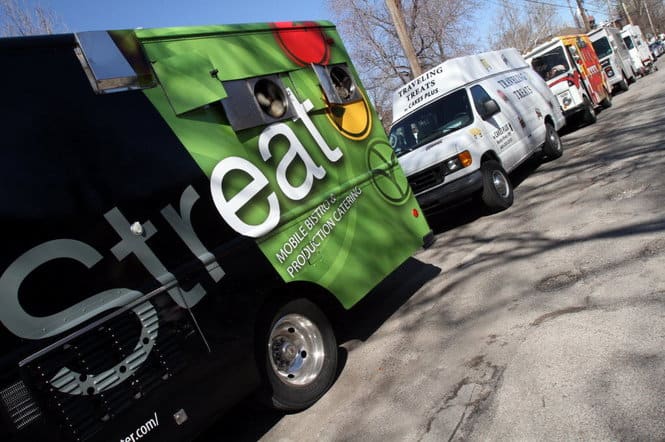 It might have been well below freezing in Cleveland last weekend, but more than 1,000 people turned up at Lincoln Park in Tremont, for the 1st C-Town Chow-Down.

Lines were up to 75 people long for items like like pulled pork bahn mi and lobster truffle pierogis, but the longest lines of the day were at the Seti’s Polish Boy truck, where patrons waited for the giant Polish Boys sausages, touted by none other than Cleveland’s own Iron Chef Michael Symon.

“This just shows what kind of food town Cleveland is,” Bryant said, as the pair were handing their steaming boxes of noodles. “It’s 20 degrees and people are waiting 2½ hours for food.”

The event, officially dubbed The C-Town Chowdown: A Culinary Convoy of Cleveland’s Finest Food Trucks, is expected to be a monthly gathering.

Click through for more info on the participating trucks, which also served mofongo, ceviche, pad thai, spring rolls and many other dishes, including of course, (salted caramel chocolate) cupcakes.

Thanks to Peggy Turbett of the Cleveland Plain Dealer for the details.  Hope you didn’t get frostbite covering this story. 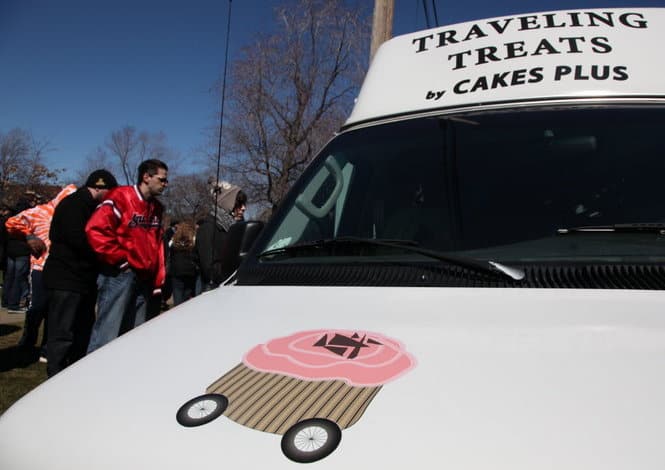 Jibaro Gourmet Food Truck
Owner: Lorna McLain and Elvis Serrano
Nickname: Hee-bar-oh (phonetically for the non-Spanish speakers in the lines)
Born: March 2011
Known Hangouts: On Tuesdays and Thursdays at E. 12 and Chester and wherever their Facebook fans tell them to go.
Favorite meals: Ceviche and Mofongo, a cooked plantain stuffed with beef stew or seafood bisque.

Oh Babycakes
Owner: Kim Henderson
Nickname: The Munch Wagon (which is the baby trailer of Baby Cakes Bakery on Mayfield in Cleveland Heights)
Born: 2006
Known hangouts: PlayHouse Sqaure, The Farmers Market at Northcoast Harbor
Favorite Meal: Strawberry Lemonade cupcakes. They were invented accidentally one day then the ingredients for strawberry and lemon cupcakes married in a mixing bowl.

Umami Moto
Owners: Jae Stulock and Sandy Madachick
Nickname: The Big Green Machine
Born: Nov. 23, 2010
Known hangouts: The North Union Farmers Market at Shaker Square, The Islander apartments in Middleburg Heights
Favorite meal: Pad Thai, we make our own sauce and everything in it is made from scratch.
Find us: @UmamiMoto 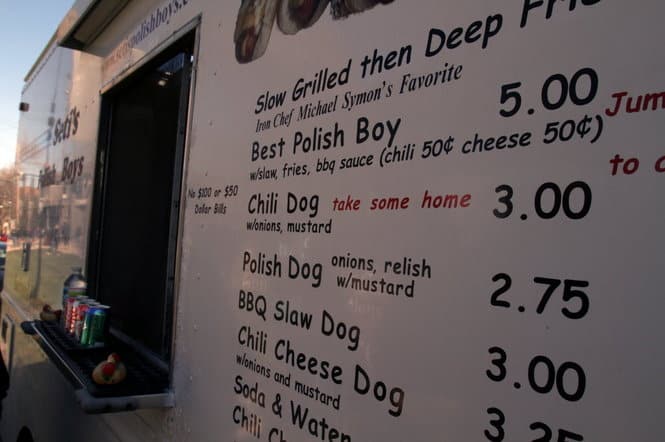 CLEVELAND AHEAD OF NYC ON THE FOOD TRUCK FRONT